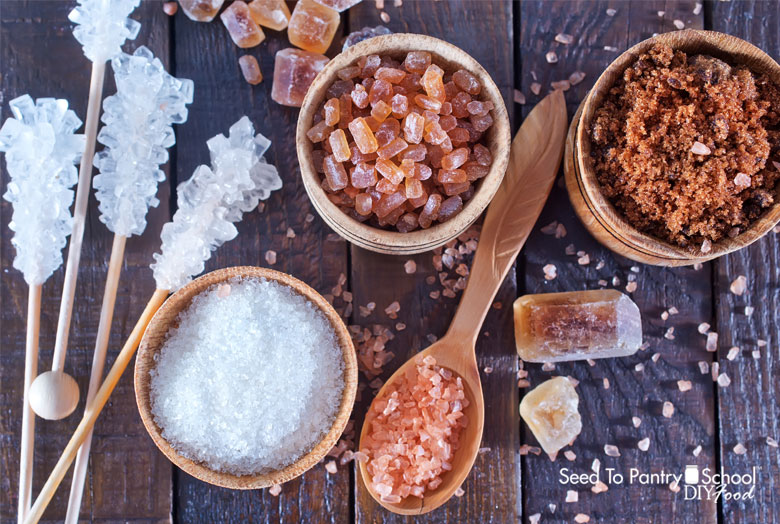 Are you looking for a healthier alternative to refined sugar? In this post I’ll talk about a few natural sweeteners and a few of their advantages and disadvantages.

First let’s go over the refining process of regular sugar and why it’s not the best choice for you. Sugar cane is grown using chemical pesticides and fertilizers. After it’s harvested the juice is squeezed out of the sugar cane. The juice is boiled several times until all of the molasses is removed and chemicals are added to help process it. The molasses is the syrup that contains all the vitamins and minerals and since it is removed all that’s left is pure sugar. It doesn’t have any nutritional value. It can cause tooth decay, diabetes, and obesity.

Here Are Some Natural Alternatives To White Sugar

Probably the most known and most liked natural sweetener is honey. Honey is made by bees from the pollen and nectar of flowers. It can be used in place of sugar. Honey is sweeter than sugar so you should use about ¾ of a cup for every one cup of sugar. It has enzymes and vitamins and even has some medical uses as well. It can help soothe a sore throat is an antiseptic, and has many other uses.

Stevia is a plant that is native to South America but it can be grown in any sub-tropical environment. Its leaves are about thirty times sweeter than sugar so a little can go a long way. Stevia can come in either an extract or a powder. A cup of sugar equals about a teaspoon of stevia extract or powder and a tablespoon of sugar equals about ¼ teaspoon of stevia powder or extract. It has zero calories and isn’t harmful to your teeth like sugar. Stevia by itself doesn’t have a very long shelf life, so what you buy in the store might not be pure stevia – sometimes they add sugar alcohols to extend its shelf life. It can also have a bitter taste if not processed correctly.

Coconut nectar comes from the blossoms of a coconut tree. It is high in amino acids, minerals, and won’t harm your teeth like sugar. It is still a form of sugar so it is not calorie free but it is not processed like normal sugar and doesn’t have any added chemicals or preservatives. You can buy it as a liquid, which is usually called coconut nectar, or in a crystal form, which is usually called coconut palm sugar. Other than the name and the form they are the same.

There are other palm sugars that come from palm trees such as Palmyra palm, Date palm, and Indian Sago palm. Each one has a slightly different taste but their advantages and disadvantages are all very similar to coconut nectar.

Maple syrup comes from the sap of a maple tree. It has no added chemicals or preservatives and it is a good source of certain vitamins and minerals. It can still cause some of the problems that sugar causes, like tooth decay, because it’s still mainly sugar and water. Be careful when you buy it, a lot of the syrups that are sold in stores are just corn syrup with maple flavoring. Be sure to read the ingredients list to make sure that it is real maple syrup. You should use about ¾ of a cup of maple syrup for every one cup of sugar.

After sugar is boiled and the juice is extracted the syrup that remains is called molasses. There are three different kinds of molasses: light molasses, dark molasses, and blackstrap molasses. Light molasses is the syrup that remains after the first boiling of cane sugar, dark molasses remains after the second boiling, and blackstrap, which is the darkest and most concentrated, remains after the third boiling. Molasses is high in vitamin B, minerals, and iron. It is still sugar so it can harm teeth and is not calorie free. Some brands of molasses might contain sulfur as a preservative. The darker the molasses is the stronger the taste will be so you may not want to use it as general sweetener but you can still use it for baking. Molasses is not as sweet as sugar so you should use about 1 ⅓ cup for every one cup of sugar.

This syrup is made by taking cooked brown rice and fermenting it. It has vitamins, potassium, and magnesium. It also doesn’t have any chemicals or preservatives. It is a form of sugar so it does have calories and can harm your teeth. It is also less sweet than sugar so you’d have to use more of it then you would sugar. It is not, however, processed like refined sugar.

Barley malt syrup is very similar to brown rice syrup. It’s made from fermented, sprouted barley malt. It doesn’t have any chemicals or preservatives and it has about the same vitamins and minerals as brown rice syrup. It can harm teeth and is less sweet than sugar so you’d have to use more of it than you would sugar.

Agave nectar, sometimes called agave syrup, comes from the agave plant, which is similar to a cactus and grows in Mexico. In it’s natural form the agave plant does have some nutritional values. Originally the sap would simply be boiled, similar to maple syrup, to produce a sweet syrup without any preservatives added. Today what you can buy in store is processed and preservatives are added to the point where some studies have shown that it’s even worse than white refined sugar.

A third form of cane sugar is cane juice which is just raw cane sugar that hasn’t been crystallized.

The fourth form of cane sugar is Rapadura. Rapadura is the least processed of the cane sugars. Rapadura hasn’t been boiled at all, it is simply dehydrated cane juice. It has the same benefits and problems that cane sugar has; it is just unprocessed and has no chemicals added.

The final form of cane sugar is Sucanat which is similar to Rapadora. The difference is that the molasses has been removed and then added back at the end of processing. The reason they do this is to create a consistent sugar. Sucanat is always one color and one taste, while Rapadura can vary a little since it is straight from the sugar cane.

Brown sugar is basically refined white sugar with the molasses added back to it at the end of the processing. So refined brown sugar is not natural. It has the same issues that white sugar has but it does have a few more nutrients because of the added molasses.

Date sugar is simply dehydrated dates chopped into fine pieces. So it has the same properties and benefits that dates do. Unlike the rest of the sugars I’ve mentioned date sugar won’t melt or dissolve in water. So you may not want to use it in your tea, though you can still use it for baking that don’t require melted or dissolved sugar.

Sorghum is a grass that grows in the U.S. but was originally grown in Africa. The process for obtaining the syrup is basically the same as with sugar cane. You can buy it in crystal form or in a syrup form. It is unprocessed, has no added chemicals, and has vitamins and minerals. It can still have the same problems as white sugar if taken in excess.

Fruit concentrates are simply concentrated fruit juice. There is a concentrate for almost every kind of fruit so they can vary in sweetness, tastes, and nutrition. They can be used in place of sugar in recipes and smoothies. The one thing you have to watch for is any added sugar or preservatives. Make sure you read the ingredients list to make sure it’s pure fruit concentrate.

Yacon syrup comes from the yacon root that grows in South America. The root tastes similar to an apple. Unlike most sweeteners it’s high in fiber and can help with digestion. It also helps beneficial bacteria in the gut, although sometimes it can cause bloating and gas. It is a lot more expensive than regular sugar as well.

I mentioned the most popular natural sweeteners but there are also a lot more exotic ones out there. Out of the sweeteners from this list I’d have to say honey is my favorite. If you have a favorite sweetener share it in the comments below.

Josh has lived a natural lifestyle his entire life. His parents (Bill and Jennifer) have made it a driving force in his family. He is an Eagle Scout and currently working on his Bachelor's degree, loves the outdoors, has an endless curiosity for science and is striving to grow into a strong Christian man.