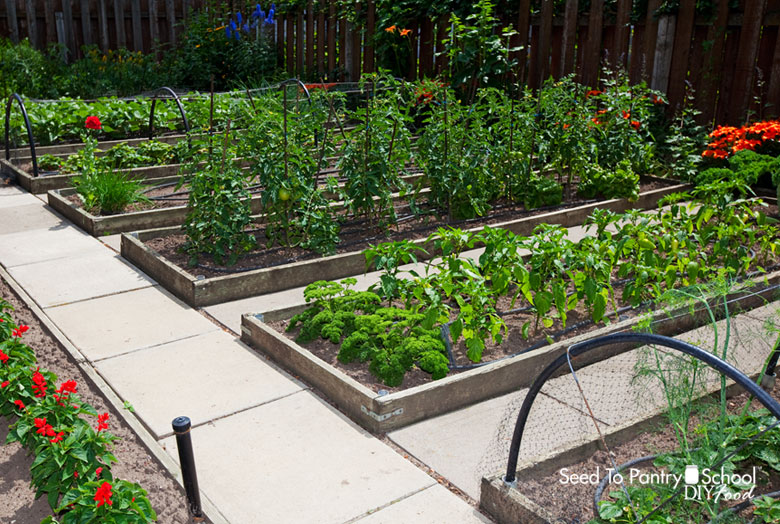 Have you ever wanted to garden but the odds are stacked against you? Perhaps your soil is rock-hard or pure sand. Perhaps your growing season is very short. Perhaps you live in a dry desert environment. Perhaps burrowing pests such as voles routinely decimate your vegetables. Or perhaps your back or knees are too fragile to handle the workload required to coax plants from the ground.

Whatever issue you face, it’s very likely the solution involves getting the vegetables into raised beds, however “raised beds” is interpreted. Because make no mistake, there has never been a more flexible and widespread system of growing a garden than getting the garden off the ground and into dedicated containers.

We like to think raised-bed gardening is a fairly modern development, but in fact, raised beds go back hundreds or thousands of years in various cultures.

In some respects, modern raised-bed techniques are really nothing more than reinventing the wheel of ancient practices used to wrestle food from uncooperative environments.

There are a lot of benefits of raised bed gardening. They reduce back and knee strain (try sitting on a crate or stool to weed, rather than bending over the beds).  They warm the soil earlier in the spring and provide better drainage. They keep weeds out of pathways. They maximize growing capacity in smaller spaces. They prevent soil compaction and soil erosion.  The soil stays friable. The gardener is better able to control the type of soil and amendments filling the beds, resulting in increased fertility (it’s easier to amend the soil in the raised beds than amend the soil in the ground).

A distinction should be made between raised beds – which are open to the ground – and raised containers, which have closed bottoms (though still permitting drainage). Both kinds of beds provide similar benefits, though raised containers can be used on patios or other areas with no direct ground contact.

Of course, nothing is perfect.  Raised bed gardens cost more for materials, take more work to construct, and require managed watering through drip irrigation or some other artificial means (since water will drain more readily). If your health is fine and if your soil is fertile, friable, and forgiving, then raised beds may not be necessary.

But the popularity of raised beds can be attributed to the fact that the advantages outweigh the disadvantages – sometimes enormously. Raised beds are particularly suited to areas where conventional gardening is challenging due to a short growing season, or dry desert climates, or poor soil conditions, or endless other problems. Personally speaking, we tried for nine years to garden in our tough clay weed-infested soil and failed every time. It wasn’t until we put in raised beds that we became almost entirely self-sufficient in fruits and vegetables within a short span of time.

Raised bed construction lends itself to endless creativity.  All that matters is elevating the beds above the ground level.  The simplest raised beds are just mounded dirt (often by double-digging), amended with compost and (sometimes) sand. However, most raised beds rely on some sort of structural support to contain the soil.

Depending on your finances, raised beds can be created using stylish new materials or stuff that’s scrounged for free.  Beds can be made from woven branches, tires, bricks, cinder blocks, boards, hay bales, sheet metal, fencing, pallets, logs, sandbags, stone, railroad ties, corrugated stock tanks or culverts, steel, concrete, recycled plastic, even “upcycled” dresser drawers…in short, anything that offers strength and support to hold in the soil. We even pressed an old wooden rowboat into service; for the past eight years, our “garlic boat” has grown the most wonderful and abundant garlic.

While construction methods will vary depending on what materials are used, a few good pointers are as follows:

Personally, I think raised beds are easier to maintain than an in-ground garden, but that doesn’t mean they’re maintenance-free.

What Grows in Raised Beds?

Raised beds are so versatile and functional that I simply could not find anything that would NOT grow. In our case, we grow corn, beans (both green and dry), tomatoes, broccoli, brussels sprouts, cucumbers, zucchini, squash, onions, garlic, strawberries, blueberries, raspberries, carrots, bell peppers, cayenne peppers, pumpkins, watermelons, cantaloupe, peas, grapes, potatoes, seed poppies, and herbs (oregano, basil, horseradish, spearmint, rosemary, parsley, thyme, sage). Because our tough clay soil is so unforgiving, we even grow fruit and nut trees in tall raised beds: peach, apple, plum, and hazelnut. Excluding the orchard, our garden is about a quarter-acre in size, and raised beds have allowed us a degree of food self-sufficiency that would be otherwise impossible in our challenging soil and short growing season.

Raised beds lend themselves to intensive gardening. According to Rodale’s Organic Life “Intensive gardening methods all have their own disciplines, but all use raised growing beds, close spacing between plants, careful attention to building and maintaining soil fertility, and succession planting to make the best use of available growing space.”

With skillful application, intensive growing methods often produce harvests 4 to 10 times greater than conventional row gardening, though of course such techniques also require more initial work, planning, and scheduling. However intensive gardening simply isn’t possible directly in the ground unless heavily amended with compost, sand, or other amendments. In fact, the four principles of intensive gardening are:

Quite simply, this kind of gardening technique would be virtually impossible without the use of raised beds.

Adapt to your Circumstances

One of the most disheartening and discouraging things you can do is try to make your garden look like those flawless photos you see on Pinterest. Let’s face it, most of us aren’t perfect, and neither are our gardens.

Instead, you’ll have to adapt your gardening efforts not only to your climate but to whatever other circumstances you face: yard space, health, time, finances, climate, etc. One of the beauties of raised bed gardening is its flexibility to conform to any of these challenges.

In our case, we have a very short growing season and tough, almost impenetrable clay soil. Our raised beds (technically, raised containers) allows the soil to warm sooner and bypasses the clay conditions. We can net the beds against birds or cloche against an early frost.

Because raised beds take time, effort, and money to install, it’s recommended you start small.  We began with four beds built from scrounged barn beams. The results were so impressive that we knew this was the way to go for us. Five years later, our raised-bed garden is a quarter-acre in size and provides nearly every fruit and vegetable we consume, with plenty for preserving and giving away.

And all it took was getting the plants off the ground.

I have two beautiful babies, and a handsome honey that are my world. We are a homeschooling family, and love gardening and finding ways to be more self-sufficient while living right in the middle of town.