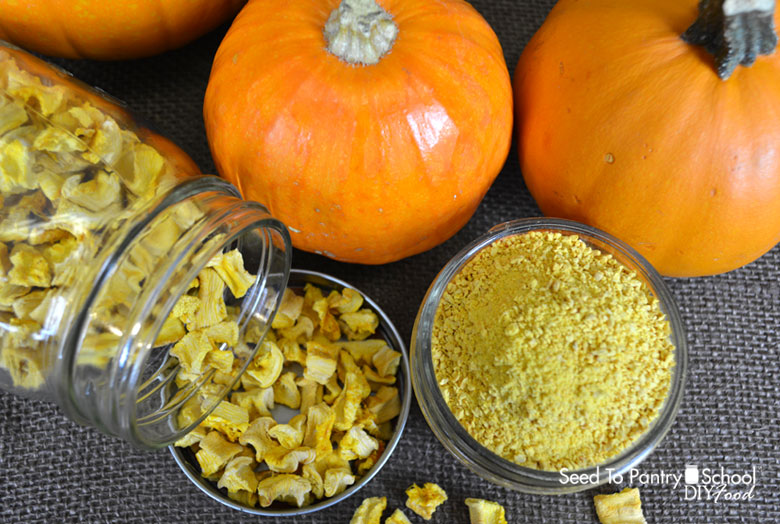 It’s so easy to get sick of something when it’s in season. God planned everything so well, you get so sick of something that it takes 3 seasons to start missing it again. Pumpkin is no exception, and some would argue that pumpkin is the perfect example of this “in-season overload” in the Fall. I can relate. After all you can only drink so many pumpkin lattes, eat so much pumpkin flavor fro-yo, or eat so many pumpkin scones before the pumpkin spirit just up and leaves you. But even though you’ve been bombarded with pumpkin this or that for the better part of 2 months already, bear with me as I explain how to preserve it and also explain that your love/hate relationship with pumpkin should really be more love than hate.

Pumpkins are really a super food; they contain high levels of beta-carotene and potassium. Both the flesh and the seeds contain a ton of other nutrients and the best part is that they are fairly easy to grow. We all love coconut oil and should stock-up on it but in an emergency situation or in a collapse it’s possible to run out. Unless you live in a tropical climate coconut trees are a little difficult to grow. Pumpkins are not difficult to grow in cooler climates and pumpkin seed oil is almost as good for you as coconut oil. The meat of the pumpkin is versatile and can be used in savory, sweet dishes and yeast bread. It’s a starchy vegetable so it will provide more calories than say a cucumber. Also it’s really easy to preserve. Pumpkin should be a preppers friend.

How To Dehydrate Pumpkin Plus Making Pumpkin Flour 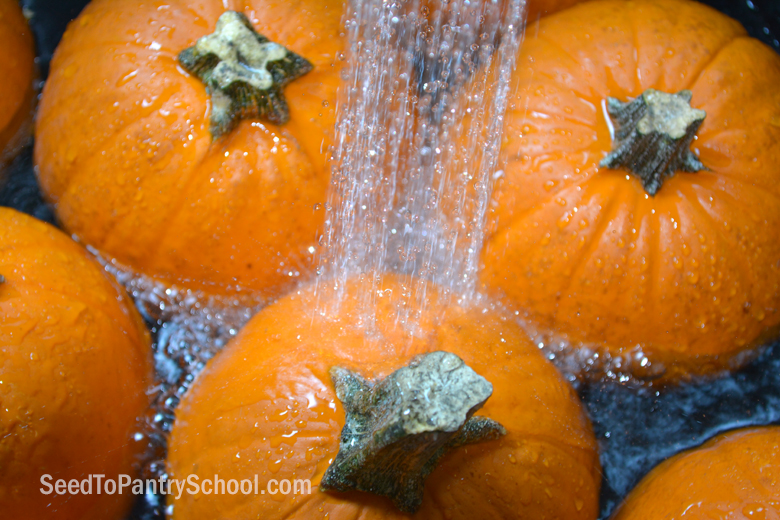 Start with good looking pie pumpkins. You can actually use any kind of pumpkin but pie pumpkins have more meat and more seeds than the bigger ones, which these days are mainly grown for decoration. Also, pie pumpkins taste more like pumpkin. 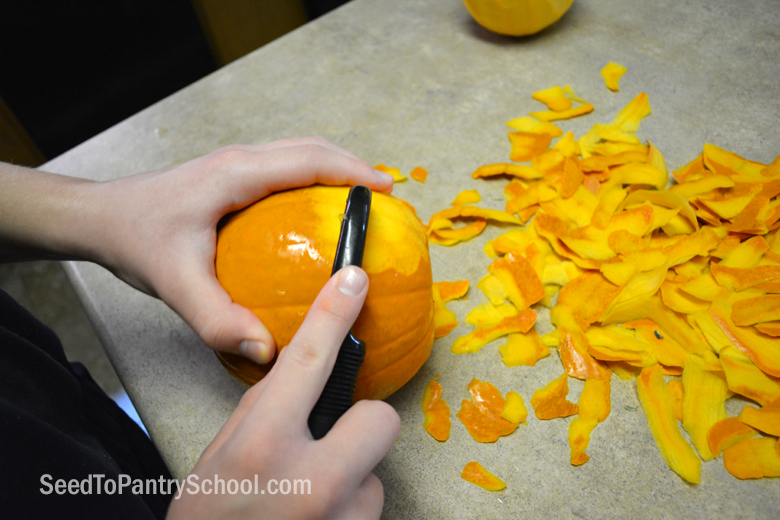 Peel your pumpkins. I use a potato peeler, but you can use a paring knife if you are more comfortable with it. The skin is a bit thicker than a potato so it’s personal preference. 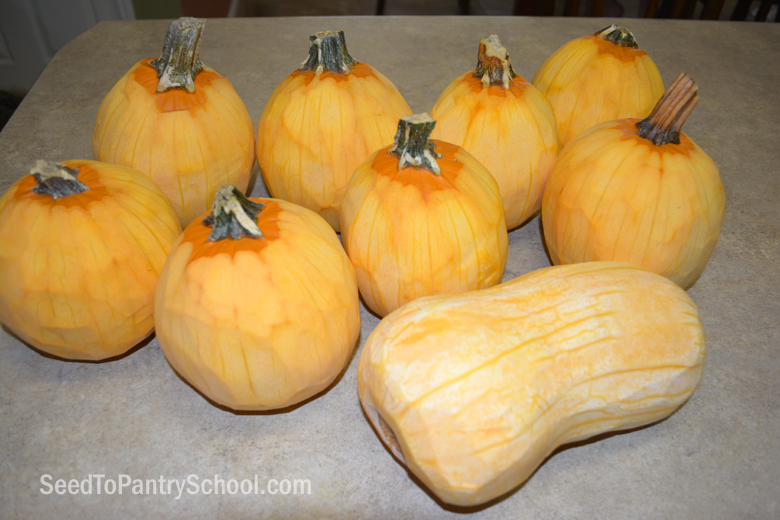 Which one does not belong? I had this butternut squash sitting in my pantry about to go bad so I thought I would peel it and dehydrate it as well. It’s the exact same process for both squashes. As you may know butternut squash can be substituted for pumpkin and vica versa. They are very similar. Pumpkins do have more seeds though. 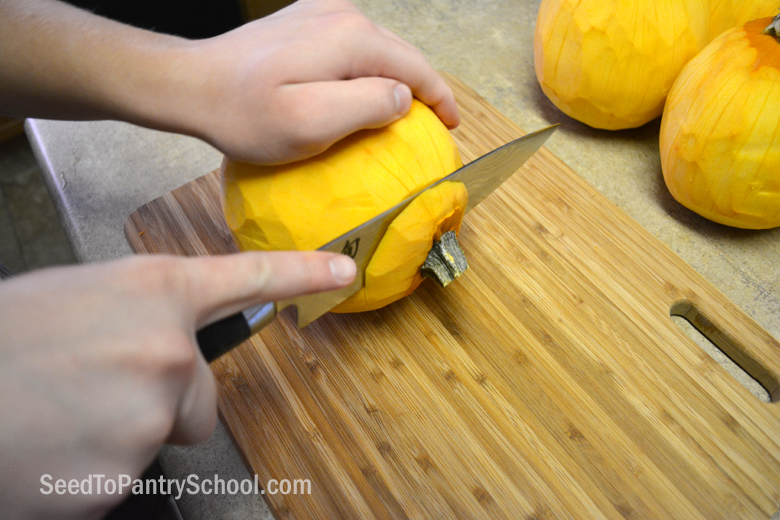 After your pumpkins have been skinned remove the stem. 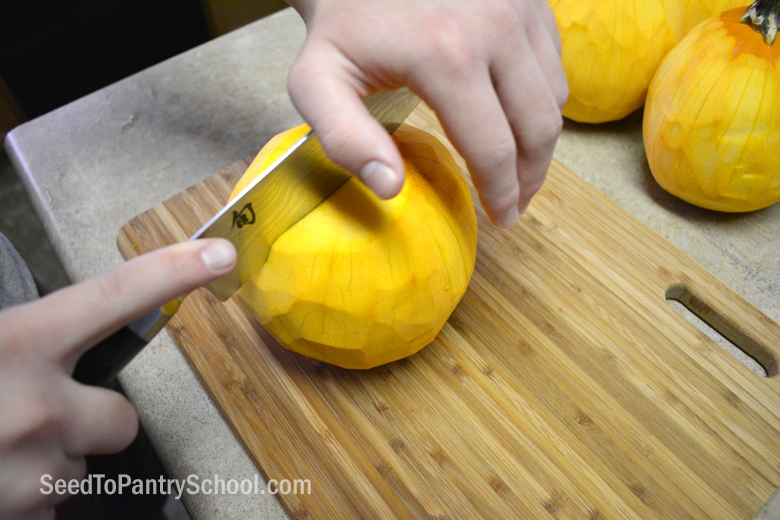 Then cut the pumpkin in half. 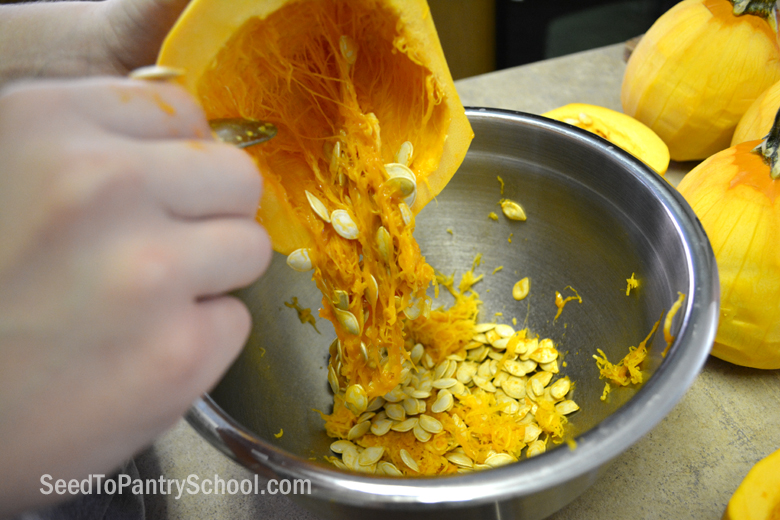 Take out the seeds. 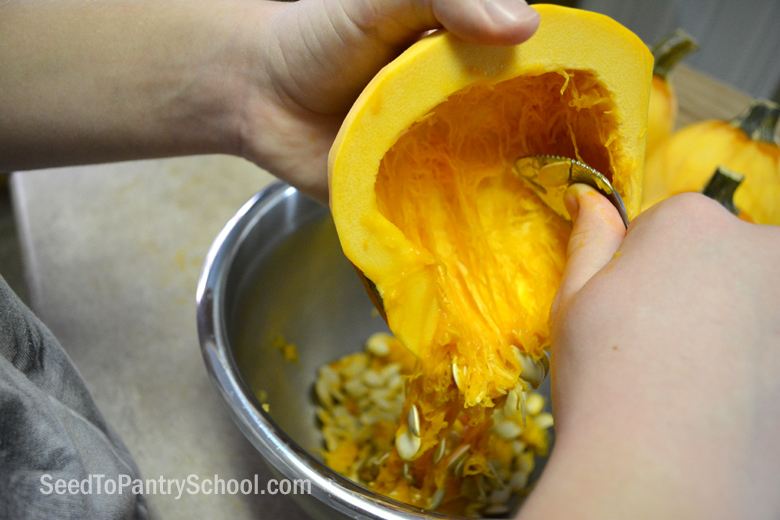 Then scrape out the stringy bits. This is a picture of my son using a grapefruit spoon. His idea. I like to use a melon baller. I suggested the melon baller to my 14 year old but he insisted on doing things his way.  What is that old saying, “hire a teenager while they still know everything”? Yeah, that’s the stage we’re at right now. Oh well, I’m not complaining. I was happy to have someone model for you so I could handle my camera without pumpkin goo hands. 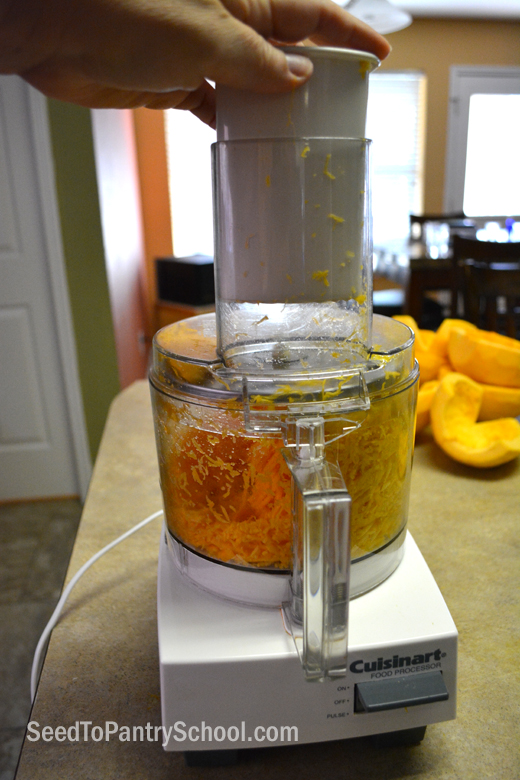 Since my intention is to make pumpkin flour out of some of the pumpkin I wanted the pumpkin shredded into tiny bits. I remember last year my grinder did not like the big chunks. If you cut the pumpkin into chunks they will get almost rock hard. So imagine your grinder having to grind little pumpkin pebbles. It takes awhile and it’s hard on the motor. 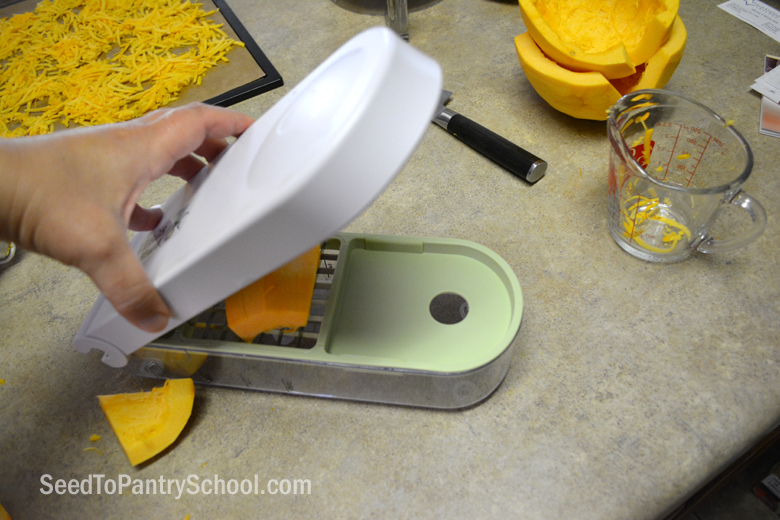 I did want to dehydrate some of the pumpkin as chunks to throw into soups or stews. So I thought I would put this dicer to the test. 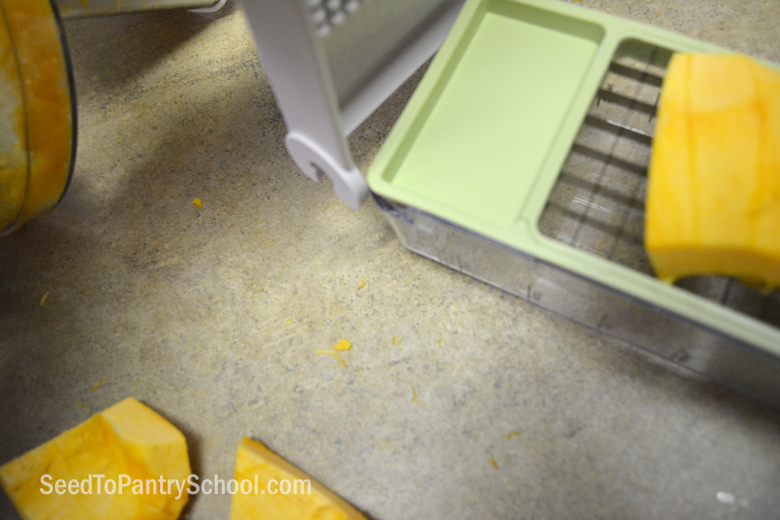 To be fair I have to mention that I did break it, but not on the pumpkin. I was dicing onions and the onions were getting to my eyes so badly that I couldn’t see. So I did not have the top in the proper position when I pushed down and the hook snapped off. After using this for a while on the pumpkin I found that it was really difficult to push down and that this dicer is better suited for nothing harder that onions. I’m not even sure I’d put potatoes in it.  I do however like it for tomatoes, peppers and onions. It’s great for making salsa but not pumpkin chunks. So I chopped up the rest with a knife. 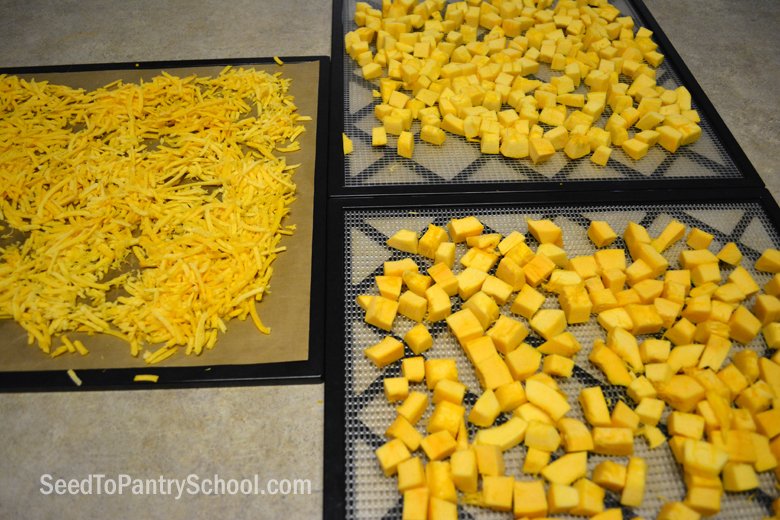 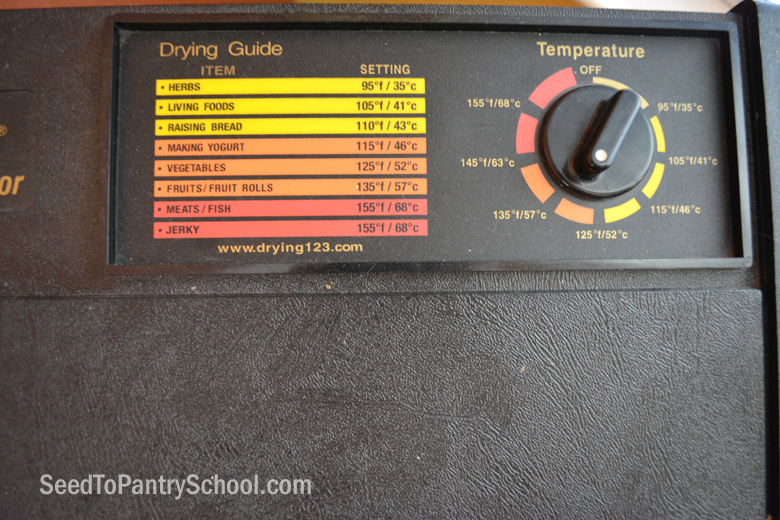 I set my Excalibur dehydrator to 135 °F for about 24 hours. The chunks take longer to dehydrate than the shreds so depending on how you cut up your pumpkin you might want to adjust the time. 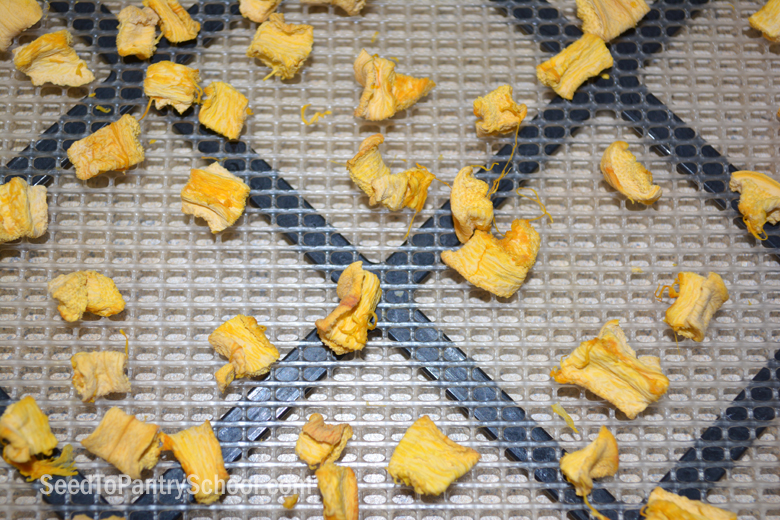 Here are the chunks of pumpkin dehydrated. 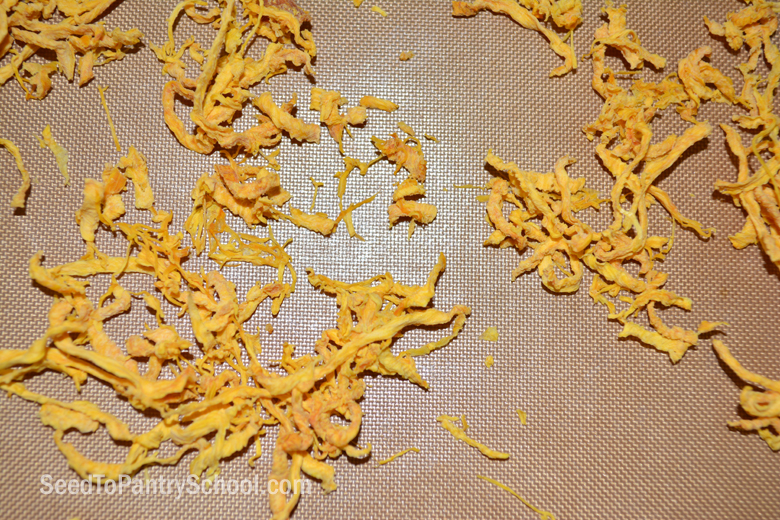 Here are the shreds of pumpkin dehydrated. 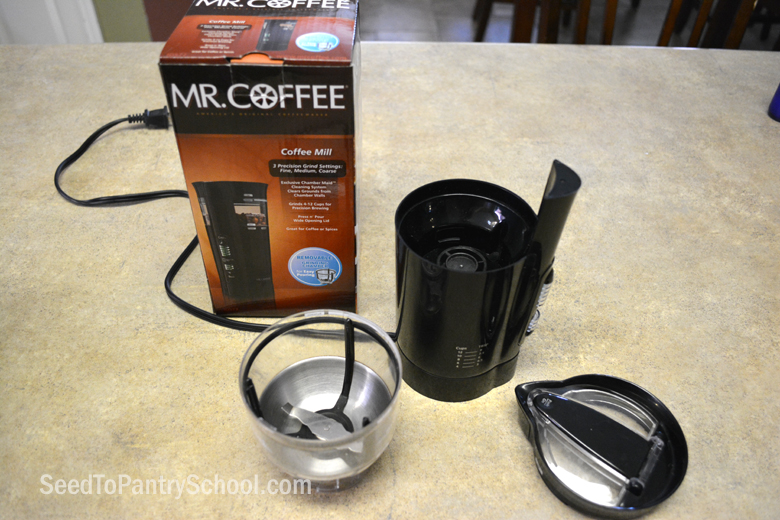 You might remember awhile back that I lost my little coffee grinder. I got a replacement that I really like. The grinding bowl is removable and hopefully I won’t have the same problem of not being able to get the blades completely clean. You can use a coffee grinder to make powder or flour out of your dehydrated food. However, just understand that that’s not really what the manufacturer had in mind when they designed the coffee grinder and that you will likely wear your grinder out faster than if you just grind coffee and a few herbs now and then. It does help to only put in tiny bits of whatever you want to grind. That’s why I shredded the pumpkin to grind and I’m not grinding the chunks. 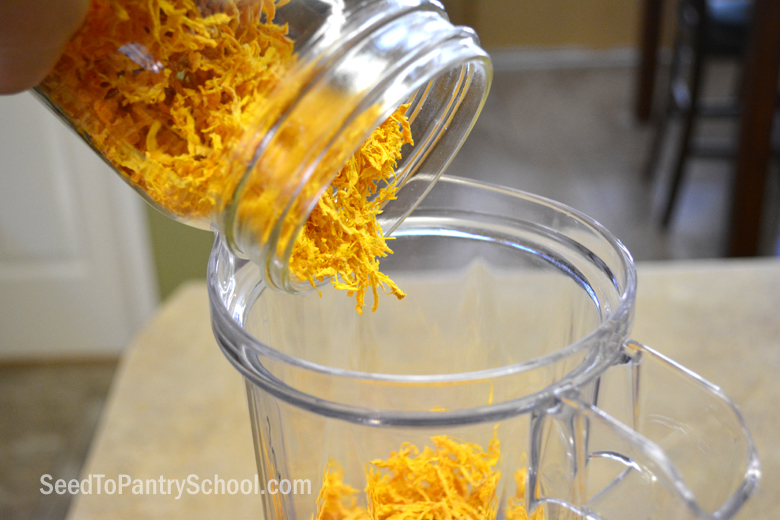 I recently purchased the twister jar for my BlendTec so I thought I’d give my coffee grinder a break and use it. 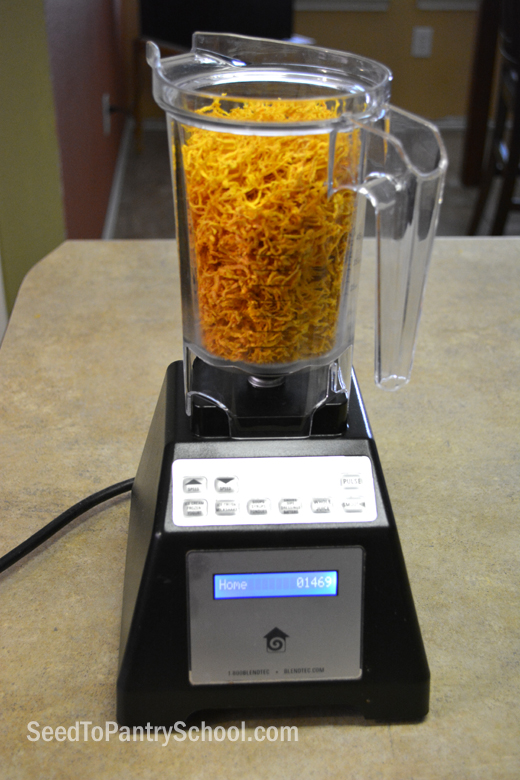 The twister jar is quite a bit smaller than the WildSide jar or the FourSide jar from BlendTec but it is made to grind dry ingredients and nut butters. 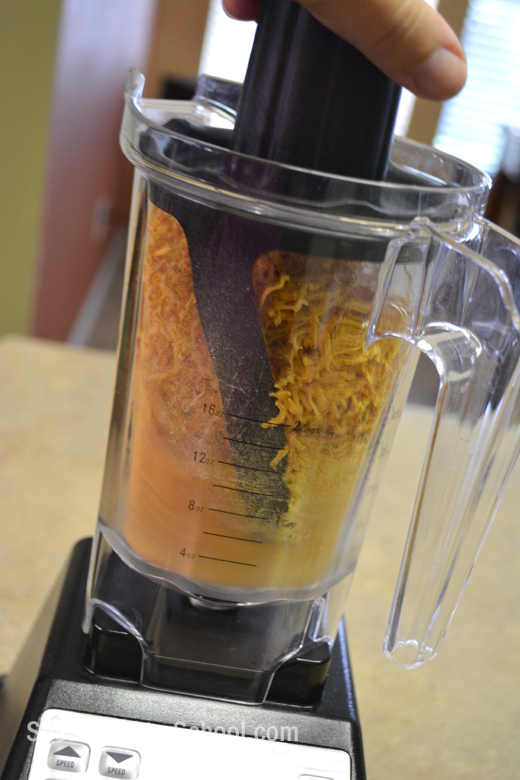 You twist the top in the opposite direction that the blender motor is rotating your food. The top is not liquid or powder proof so once the food is ground up into a powder a bit of it escapes from the top. 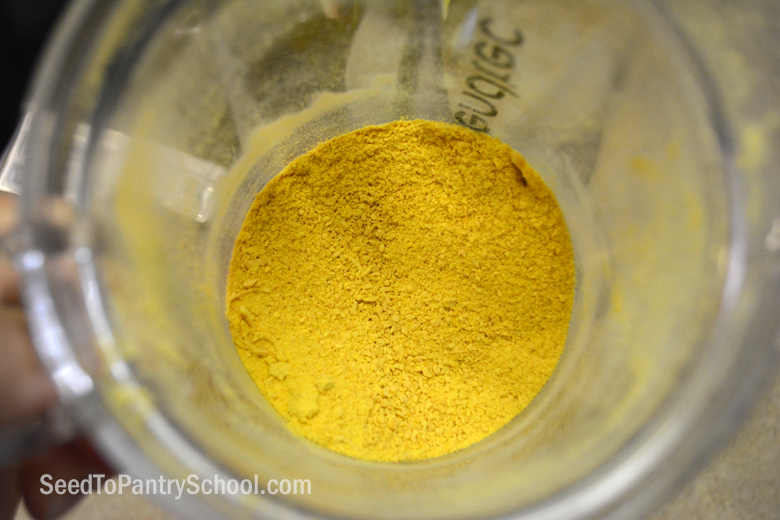 At this point I could put on the liquid proof lid on and grind up the powder even finer, but alas I am lazy and honestly this is fine for throwing into some bread or other baked good. You can replace 1/4 cup of wheat flour with pumpkin flour in yeast bread.  You can also reconstitute pumpkin flour with hot water to make pumpkin puree. 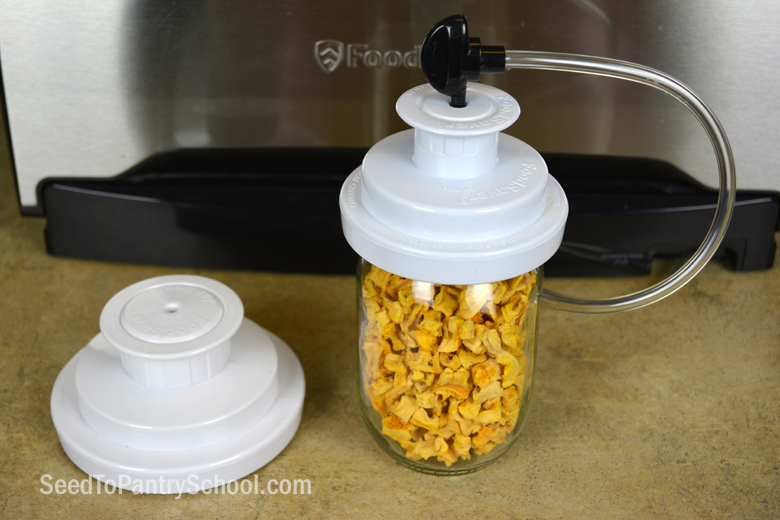 I like to use the FoodSaver to vacuum pack all of my dehydrated food. I use both the regular mouth and wide mouth accessories. Label and put away.

Dehydrating pumpkin is super easy. If you preserve it for later in the year maybe you won’t have to eat so much of it now that you get sick of it and you can enjoy the health benefits all year long. 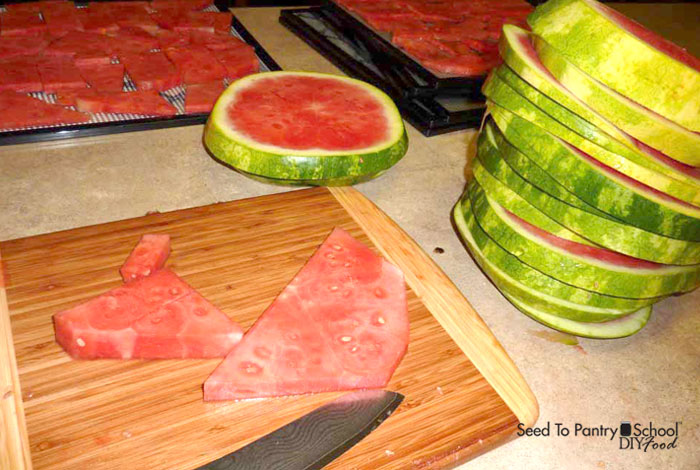 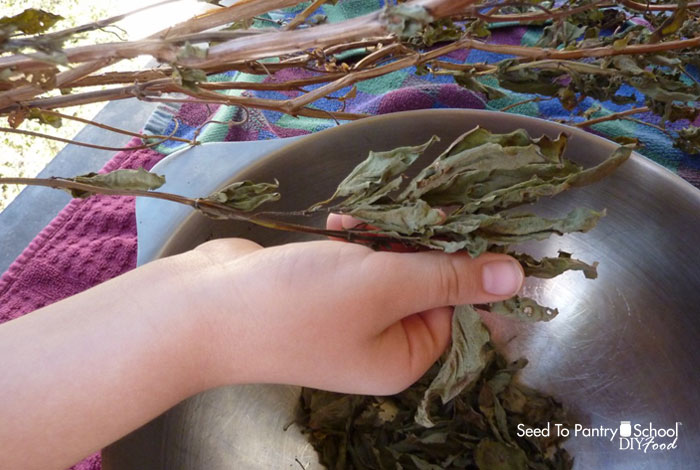 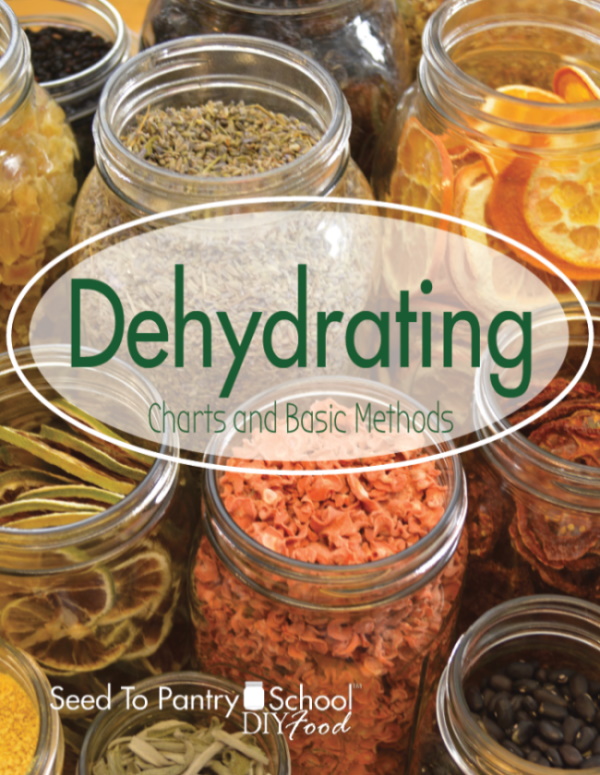