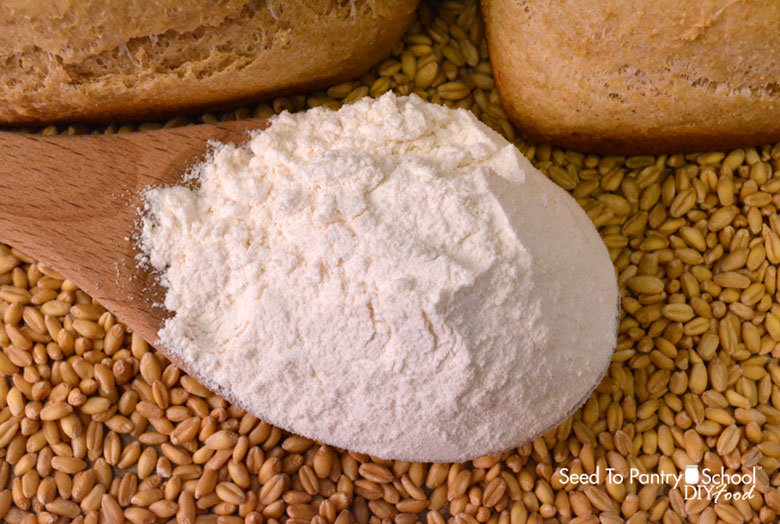 The short answer is maybe but probably not. I’m really not that fickle, I can give you a straight answer most of the time. However, like some things in life wheat flour is a little complicated, at least it has become that way in recent years. So let me back-up and first explain what wheat flour is and how it is made, then you can decide for yourself and I’ll share the decision I’ve made for my family.

When I say flour most of us think of wheat flour, that is flour made from wheat berries. However, flour is just ground up grain (these days it can be ground up anything, such as potato flour). So you can have many different flours made from different things. Some examples, ground spelt is called spelt flour, ground quinoa is called quinoa flour and even ground corn is called corn flour or cornmeal (although cornmeal is usually ground a little coarser than we would call a flour).

Most of these grains can be added to wheat flour to make bread. You can use only these other grains to make bread but the bread is not exactly what we think of when we think of sandwich bread. For example, cornbread is not like sandwich bread. Most grains will produce a bread-like substance but they might not be what you expect or what you desire.

These days with all the celiac disease and gluten intolerance there are recipes for gluten free (wheat free) bread, but they usually require ingredients that are not really “storable”; they might be hard to find and the jury is still out on whether they are really healthy alternatives (such as xanthan gum). There really is not a bread (as we know it—light fluffy sandwich bread) without some kind of wheat.

Now that we have established that most bread that we currently eat or would desire to eat in a crisis situation has some amount of wheat flour in it the question is do we store wheat flour or wheat berries? (Note: people with celiac disease should not eat wheat bread in a crisis situation, and there are alternate foods to store to get the same calories and nutrition that wheat provides.)

Once the bran and kernel of the wheat berry are removed the semolina is ground again and again with high powered, heated grinders to produce white flour. It is then treated with chlorine oxide so companies don’t have to wait for the aging process. (The chlorine oxide treatment of white flour is banned in Europe.) This also turns the white flour white (although it would still turn white if it was left to age properly). I should back up here a bit and say that this is not the first chemical applied to the wheat. The wheat is treated with a fungicide and usually pesticide in the wheat silo.

White flour is often fortified with vitamins and minerals because the process of making it took all the nutrients out. However, don’t be fooled. Most vitamins and minerals that are added to fortify a food are hard to digest and most do not even get absorbed by the body. However, because all the unstable nutrition was removed this makes the white flour very self-stable to the tune of 10 years or so.

Of course, we’ve all heard that white flour (which is mostly starch/sugar) spikes your blood sugar as it is high on the glycemic index. It has no enzymes and is hard for your body to digest. It is not a healthy food!

There you have it! Through modern technology, we’ve made white flour almost as healthy as eating cardboard, but it has a shelf-life of 10 years or more. So should you store it? If you don’t have a wheat grinder and you are new to prepping storing 20lbs of white flour is probably not a bad idea. That flour can get you through any short-term disaster. However, I would put all of my prep money toward a grinder and then make glue or play dough out of that 20lbs of white flour when you have obtained a wheat grinder. I do not store white flour for my family.

I always hope that you are eating what you store and storing what you eat. I pray you are eating whole wheat flour. However, please do not store whole wheat flour! Since the brand and the germ are not removed the flour has oil from those parts of the kernel and will go rancid rather quickly.
As a matter of fact, it is not recommended that you grind your wheat berries until you are ready to use them unless you store the freshly ground whole wheat flour in the freezer. If you have purchased whole wheat flour from the store and thought it had an awful taste chances are that you got some flour that had already begun to go rancid. It actually happens more than you think. I’ve picked up several bags that were already starting to go bad.

Once you get the hang of grinding your own wheat you should consider sprouting your wheat first for maximum nutrition.

You might be wondering about vital wheat gluten. Most whole wheat bread recipes (including mine here and here) call for you to add extra protein to the dough to give it that light fluffy look and taste. Should you store vital wheat gluten?

Vital wheat gluten is the protein of the kernel in a powdered form. It is made by washing wheat flour dough with water until all the starches dissolve, leaving just the gluten behind. Essentially it is a protein powder. I do store gluten, but everything in my food storage is rotated and I do not keep food longer than five years. I have my doubts as to how long it would last if there was a complete collapse.

In reality, it is much healthier for us to eat that heavy unleavened bread we have heard about in the bible. There are other alternatives such as using natural yeast, however, a bread starter might be difficult to maintain in a collapse. All the more reason to learn how to make one now. If you are familiar with the process now you’ll be more likely to succeed when conditions are not ideal.