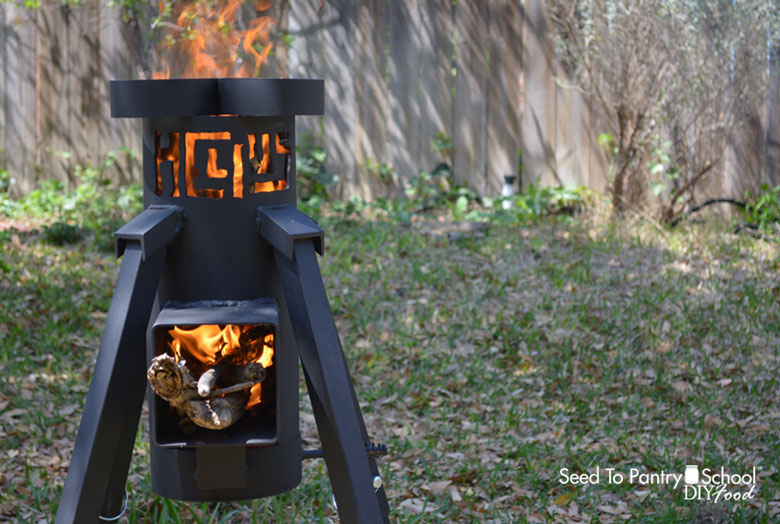 We’ve reviewed several different types of off-grid cooking devices previously–you can cook using just solar energy with the All American Sun Oven, or you could cook inside with just candles on the HERC Oven. However, since we do a lot of dutch oven cooking, our preferred method is still outdoors over some kind of open flame.

There are loads of sites on the internet offering instructions on building rocket stoves, and I’ve been interested in them for a while, but just never got around to building one. I’ve seen their potential–the Kelly Kettle is basically a miniature rocket stove, and it produces a tremendous amount of flame in a short time with just a handful of tiny twigs. So when Titan Ready USA (makers of the HERC-XXL Oven, which we love) offered us a Helius Rocket Stove to review, I was ready to get my flame on!

What is a rocket stove?

It’s a highly efficient wood-burning cooking stove, designed to burn small pieces of wood. There are many different designs, but they all have similar components:

Air is drawn through the fuel magazine, into the combustion chamber, and up the chimney (since hot air rises…), which makes the rocket stove operate almost twice as efficiently as an open fire. The majority of the heat is directed straight up to whatever is being cooked, as opposed to being radiated out in all directions like an open fire would. 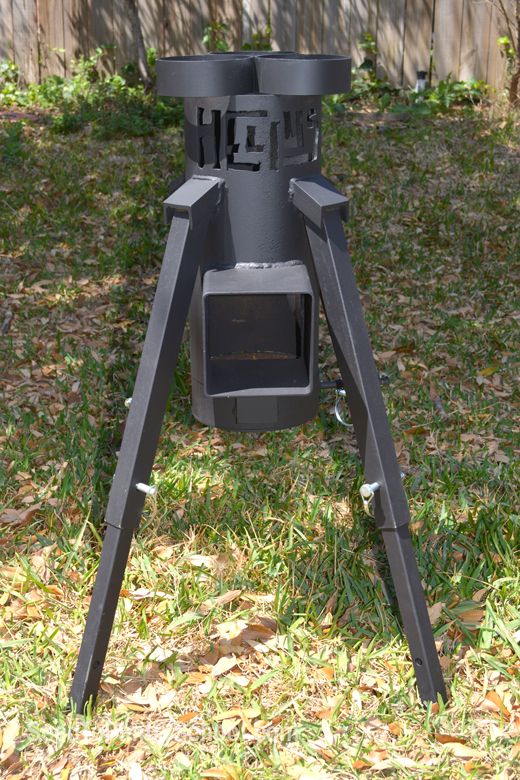 The main body of the Helius is a 6″ industrial Schedule 20 pipe, with a high-temperature woodstove coating that will withstand up to 2200 degrees. It sits on 4 adjustable steel legs, allowing you to adjust the height of the cooking surface from 21″ to 31″. The stove weighs in at a whopping 30 pounds, so this is not something you’d take on a backpacking trip, but it’s also not something that’s going to be affected by windy conditions either! 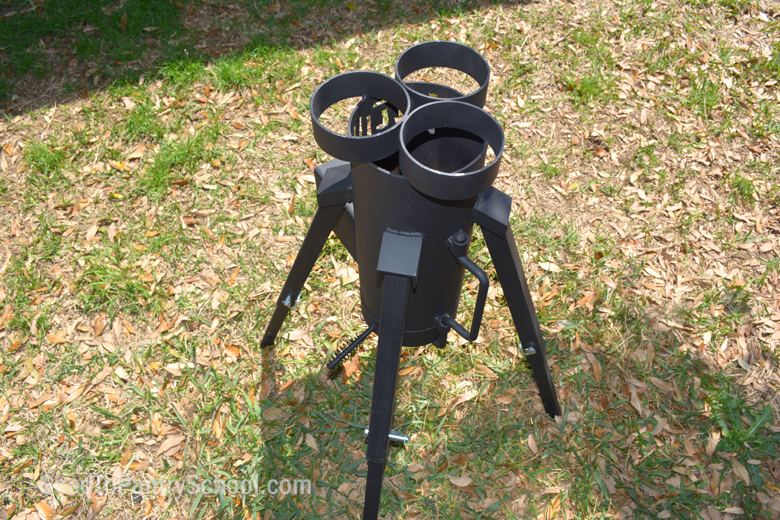 The Helius has three large pipes welded to the top of the chimney to provide a larger cooking surface, as well as provide additional airflow. If you just set a large cooking pot directly on top of the main chimney, you’d end up almost smothering the fire. 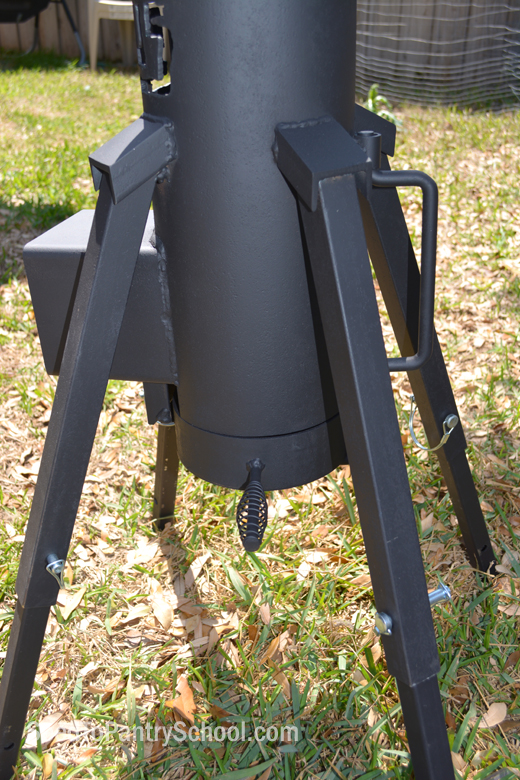 At the bottom (where the combustion chamber is) there is a quick-release ash drop. 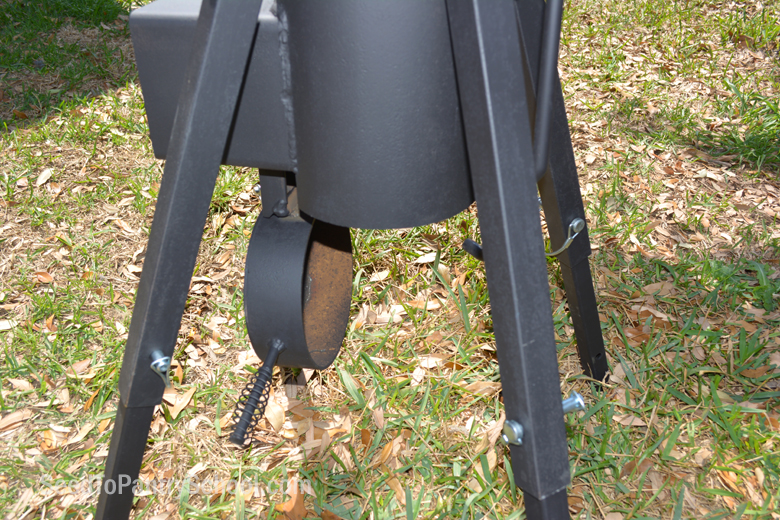 By moving a “cool touch” handle you can empty the combustion chamber of the accumulated ash while continuing to cook. 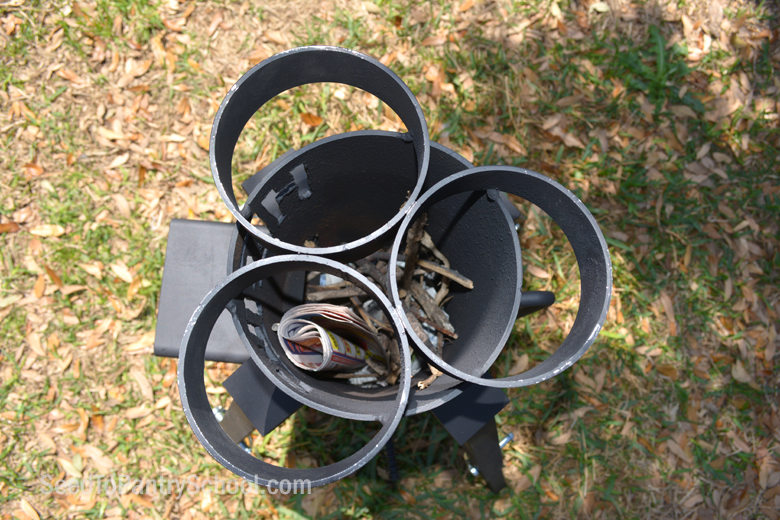 To start, I put a couple pieces of newspaper inside, and dropped in a handful of 1/4″ wide twigs. 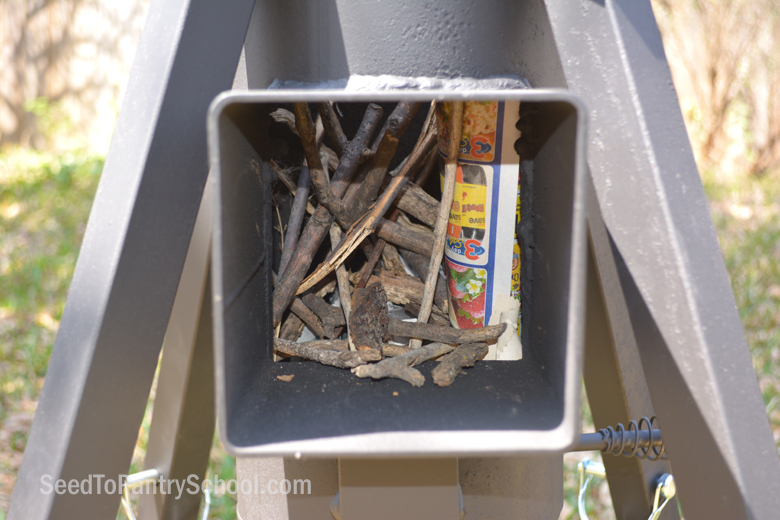 Here you can see what I’ll be lighting. 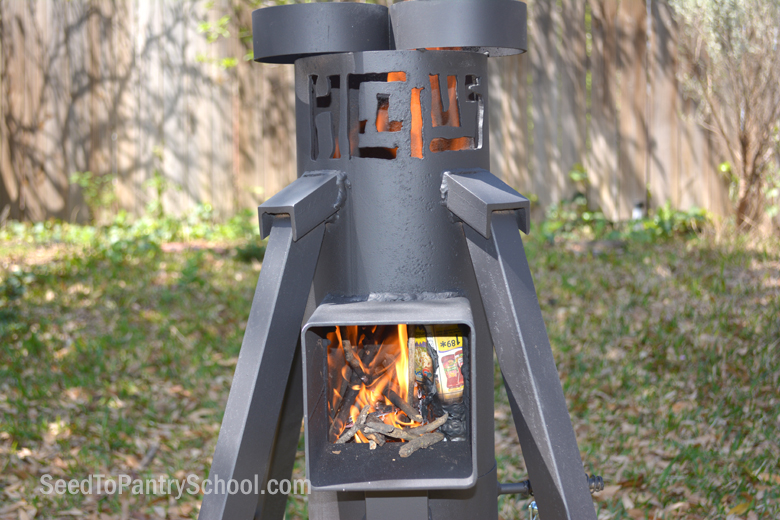 With just a single match, I had roaring flames going within minutes. 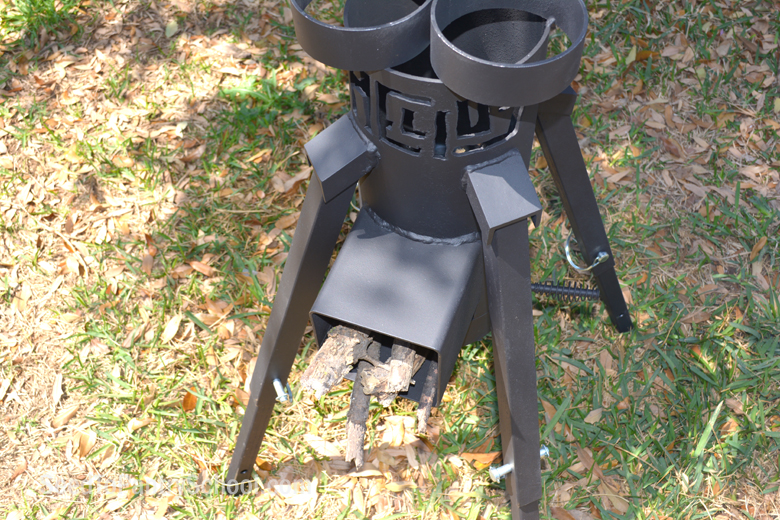 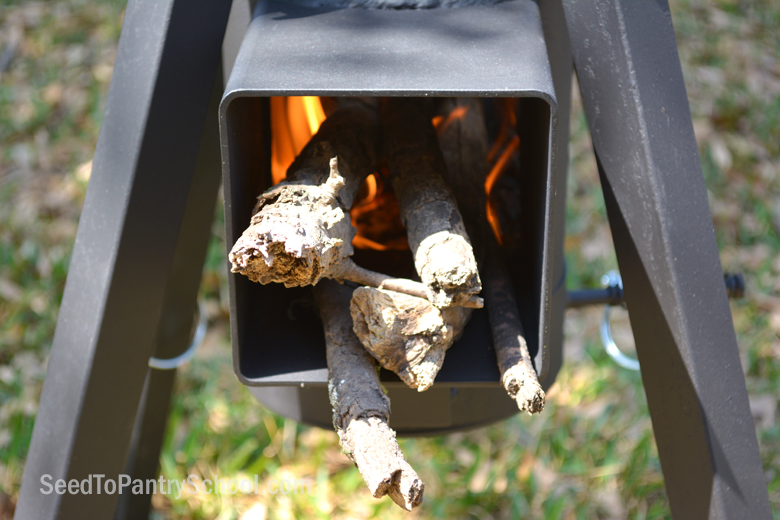 The fire stays contained in the combustion chamber; the parts of the wood still in the fuel magazine are not on fire yet.

Air is drawn into the fuel magazine and up the chimney, so the outer edge of the magazine is still relatively cool. You can easily reach down to push your fuel deeper inside (but don’t actually get your hand inside the magazine – you could still get hit by sparks or a piece of wood shifting). 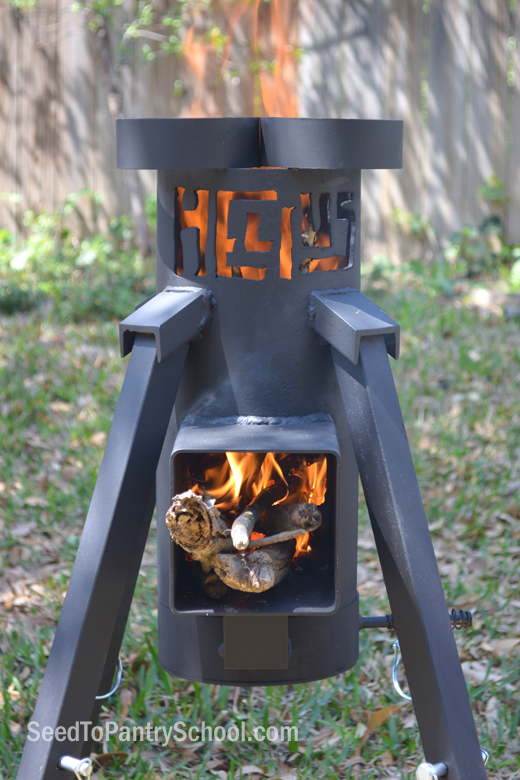 As you can see, with just a few small pieces of wood I had flames reaching a foot or more above the cooking surface. I don’t know what temperatures were being reached at the top, but I’m going to go with “really hot!”. 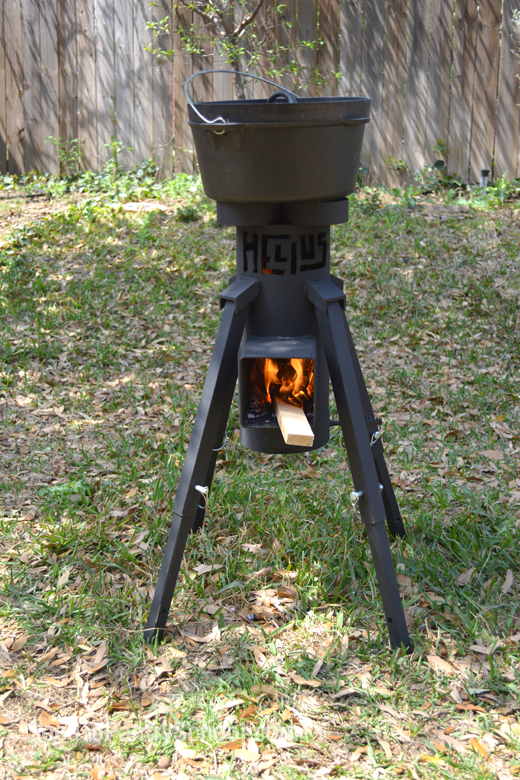 After a while I let the flames die down, and only had one or two pieces of wood in the fuel magazine at a time. The Helius rocket stove is sturdy enough to hold our largest, heaviest dutch oven, and with the wide, thick legs I wasn’t worried about it wobbling or tipping.

If you’ve been running the stove for a while, eventually the ash is going to build up inside the combustion chamber – after all, it’s only 6″ across. As I mentioned before, you are able to empty the combustion chamber while the stove is burning, allowing you to continue cooking non-stop. You need to be sure you have some longer pieces still in the fuel magazine that will stay burning, because obviously when you open the bottom, everything is going to drop out. And what drops out is going to be hot (or even still on fire), so be sure you’re emptying it onto a safe surface.

So did we like the Helius Rocket Stove? Yes! It elevates whatever you’re cooking off the ground, allowing you cook without bending over. I was able to burn just about anything from wood scraps to dry yard waste, with very little residue and almost no smoke. And it burned hot enough that I could see using a pressure canner, or maybe even a deep frier. Obviously the Helius is more expensive than a rocket stove made at home from a couple of tin cans, but it’s going to last years (decades?) longer, burn much hotter, and handle much larger cooking pots.

The Helius Rocket Stove is available from Titan Ready USA. 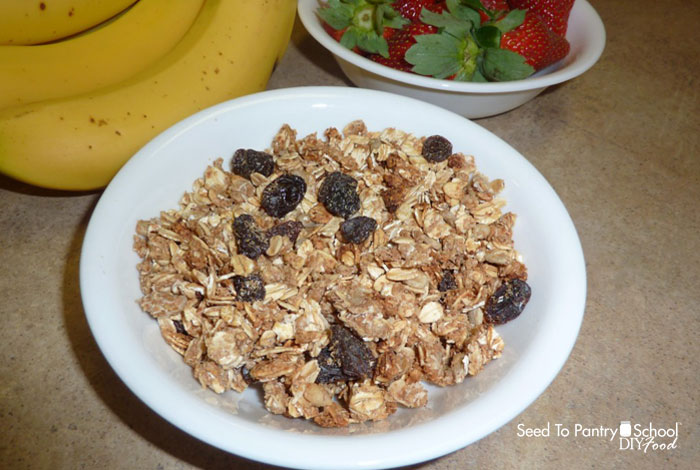 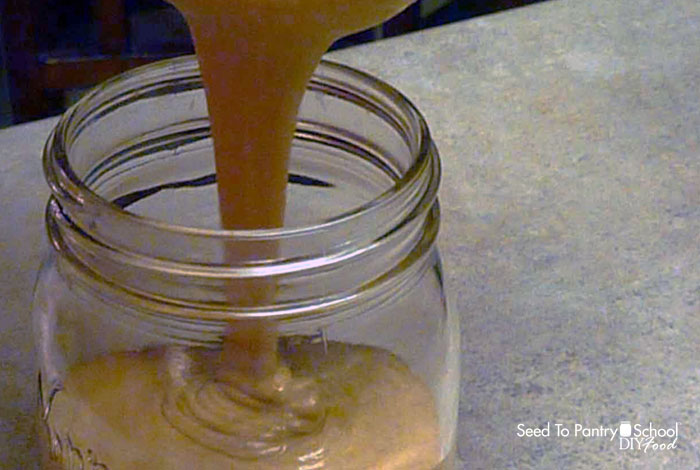 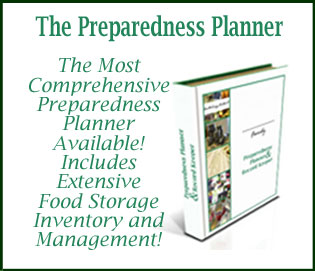