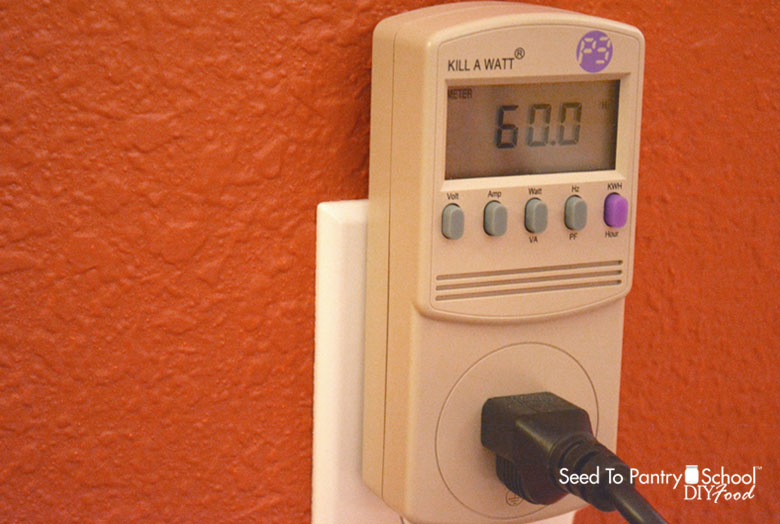 If your mom was like mine, you probably got an earful when you’d leave the lights or TV on in a room after you’d left (“we’re not made of money”). Once you had to start paying your own bills, did you ever wonder how much extra that wound up costing you on your monthly electric bill? I know that a big chunk of our bill comes from the air conditioning, but how much of the rest of it comes from things like the dishwasher, refrigerator and computer(s), and how much comes from forgetting to turn stuff off when we leave the room? Up until now we had no way of figuring that out, but then we got this little gadget that actually measures this mysterious figure. It’s called the Kill-A-Watt Electricity Usage Monitor.

The Kill-A-Watt is a small box that you plug into the wall, then plug an appliance (a light, a stereo, etc.) into. It has a digital readout that will measure volts, current, watts, frequency, and power factor. These are all useful for just testing the outlets in your home–you can quickly determine if an outlet is live, and if it’s receiving the correct “quality” of power (is the voltage too low, for instance?). But the real benefit of the Kill-A-Watt is its ability to measure the actual electricity used by whatever you have plugged in.

Electricity is measured in kilowatt hours, abbreviated as kWh. The energy a device uses is measured in watts, and you multiply that times the hours it is turned on to get kWh. For example, a 40-watt light bulb running for 25 hours would use 1 kWh (40 x 25 = 1000).

You can figure out the amount you pay per kWh by looking at your electric bill or logging on to your electric company’s web site. In our area, we pay about 11 cents per kWh (plus taxes and other fees of course), so that’s the figure we’ll use for all our calculations.

The first device tested was my computer. I have a desktop tower, two monitors, an external hard drive, a printer, and various network gadgets. The monitors and the printer will go dark after they haven’t been used for a while, but the computer and the external hard drive are running constantly. I wanted to first see how much it was actually costing us to run all of this, and then if we could really save any money by putting the computer to sleep.

I plugged everything into a large power strip, then into the Kill A Watt. As soon as you turn on whatever is plugged in, the Kill-A-Watt starts recording the kWh used, and the duration (in hours) the appliance is turned on. After running for 12 hours, the meter read 1.03 kWh, which meant it had used right at 11 cents worth of electricity. So that’s less than a quarter a day, or about $80 per year. If I had the computer go to sleep during periods it’s not used, I could probably shave a little off of that, but not much – we use it to store files for other users on our home network, plus it runs backups of the other machines during the night, so there really isn’t much time that it’s truly “idle”. I could probably get that cost down to maybe $50-$60 per year.

Next we tested our Excalibur dehydrator. I expected this to be worse, after all, a dehydrator is really just an electric heater and a fan, and anything that generates heat is going to use a lot of electricity. We ran the dehydrator for 12 hours on a medium setting (about 135 degrees), and determined that it used 3.56 kWh. So, breaking out the calculator, that gives us a cost of 40 cents. We’re not worried about that amount; after all, we don’t run it 24/7, and dehydrating things ourselves is still cheaper than purchasing dehydrated foods, especially if we use all 9 trays at once.

Next it was on to the refrigerator. Most modern appliances come with a tag that tells you the estimated annual energy usage, but we wanted to see how accurate that was. After 12 hours our fridge had used .63 kWh, or about 460 kWh per year. The tag that was originally on it estimated 455 kWh per year (or about $50), so it was pretty accurate. If we had found the reading to be much higher, that might have been an indication that the refrigerator was working harder than it should, and we could either check to see if the temperature was too low, or if the coils needed cleaning.

Finally it was on to the part we were really curious about – light bulbs. All of the new compact fluorescent (CFL) and light-emitting diode (LED) bulbs promise savings over the old incandescent bulbs, but how much money will they really save you?

So the LED bulb will definitely use the least amount of electricity per year, but you also have to look at the cost of the bulb itself. The incandescent bulb cost $1.90 (and would have been less in a multi-pack), the CFL was $2.50, and the LED was $8. If you ran each bulb for 3 hours per day, in a year the incandescent would cost you $7.43 in electricity, the CFL would cost $1.50, and the LED would cost $1.10. So you can see the obvious cost savings by switching to CFL, but to us it doesn’t seem like LED bulbs are worth it yet. You only save 40 cents a year over CFL, but they cost $5.50 more, so it would take you over 13 years to break even!

My only gripe about the Kill-A-Watt is that since it’s plugged directly into to wall, it can be a bit hard to read the display. Once you unplug it the display goes blank, so you need to take your readings while it’s still connected. If your outlet is behind some furniture or an appliance this can be difficult, but since you’ll probably only be taking one or two readings, this is a minor inconvenience.

We found the Kill-A-Watt to be an interesting experiment, and it convinced us NOT to make a big investment into switching our lights over to LEDs! That paid for the cost of the device right there. There are still several appliances we want to monitor –an electric heater we use in the winter, our TV and DVR that are just on standby most of the day, etc. I hate to sound wasteful, but it also showed us that we didn’t need to be terribly concerned about forgetting to turn off the kitchen light at night – we can afford the 15 cent hit every once in a while. If you want to know without a doubt what devices are the biggest users of your monthly electric bill, this device is perfect. We’d love to see a 220-volt version that would let us see what our air conditioner costs to run, but maybe we’re better off not knowing!