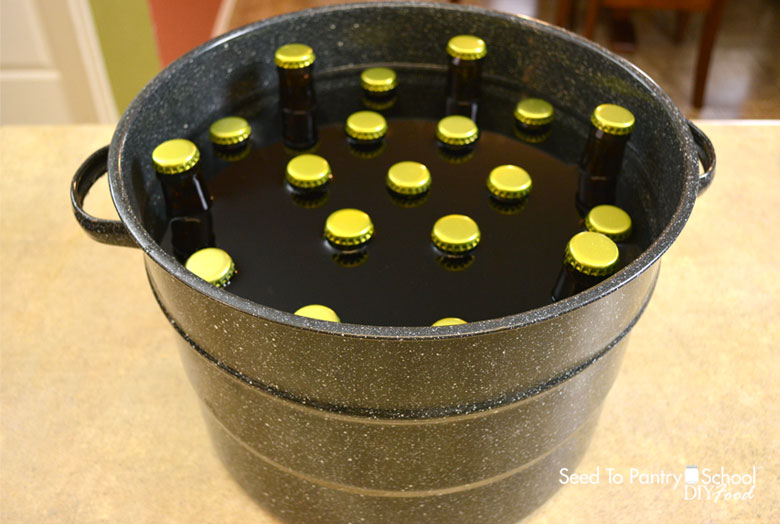 In my previous post on How To Make Hard Cider, I bottled my cider in swing-top bottles and put them in the refrigerator to stop the fermentation process. For the small batch I was making, that works great, but what if you’re making a batch so large that you just don’t have room in the fridge?

If you have a still cider, this isn’t a problem. A still cider (as opposed to sparkling) means that the fermentation process has stopped; no more CO2 is being produced, so the pressure won’t build up inside the bottle after it is capped. These bottles can be stored at room temperature without worrying about a “bottle bomb”.

If you’re not totally sure that the fermentation process has completely stopped, you can always add part of a Camden tablet to each bottle. Camden tablets are a sulfur-based product that will kill the yeast without affecting the flavor of your cider. You typically add one tablet per gallon of cider, so you would either add an entire tablet (or more…) before bottling, or add a portion of a tablet to each individual bottle.

You could also add more sugar than the yeast can use. The alcohol content will eventually get so high that it will kill off the yeast. You’ll end up with a very strong, very sweet, still (flat) hard cider.

None of these methods will work, however, if you want a sparkling cider. To get your cider to “sparkle” (be fizzy) you have to let the fermentation process continue for a while in a sealed bottle, then stop the process completely. This is a bit tricky, for two reasons:

So your best bet for sparkling cider is to pasteurize the bottles.

Pasteurization is a process invented by the French scientist Louis Pasteur (the same guy who created the rabies vaccine!) in 1864. It’s a technique for treating milk, wine, beer, cider, and other liquids with heat, in order to kill the bacteria that causes spoilage. In our case we’re using it to kill the yeast–they’ve done their job, and now it’s time to send them to yeast heaven!

The time and temperature needed to pasteurize liquid varies depending on what it is; in our case we need to hold the bottles of cider at 160°F (or slightly higher) for 10 minutes.

How To Make A Sparkling Hard Cider

Once your fermentation is complete you’ll bottle your cider. You’ll add more sugar at this point–some to sweeten it, and some for carbonation. How much sugar depends on how sweet you like your cider; a good starting point is 4 to 6 tablespoons per gallon.

When the sugar is completely dissolved, bottle and cap your cider as normal. Let it sit at room temperature out of direct sunlight for a few days, then begin testing the carbonation level. On day 4 or so, open up a bottle. If it’s got the right amount of fizz, you’re ready to pasteurize, and if not, cap it and open a different bottle the next day (and so on).

If your carbonation is too high (for example, it gushes when you open a test bottle), then don’t attempt to pasteurize the bottles–the heat and pressure will be too much and you could wind up with exploding bottles.

How To Pasteurize Hard Cider 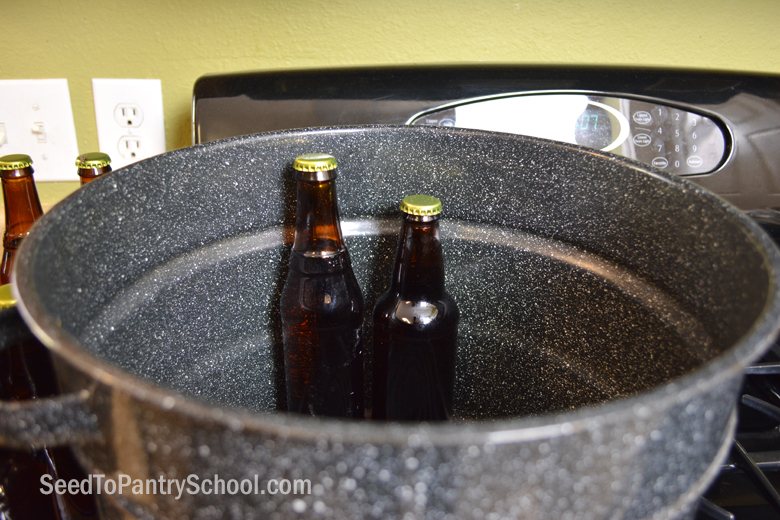 You’ll need a pot deep enough that you can fully submerge your bottles under water. My pot in this picture would be fine for the shorter bottles, but those taller ones could be difficult–the water would be close to overflowing by the time they were fully submerged. 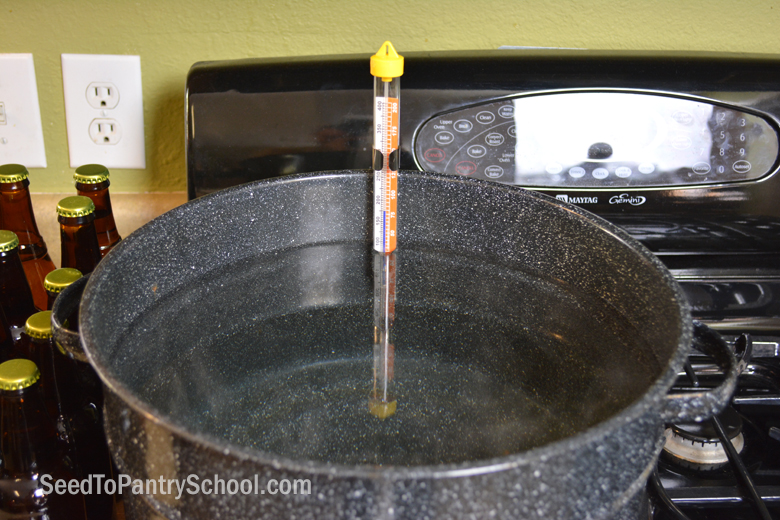 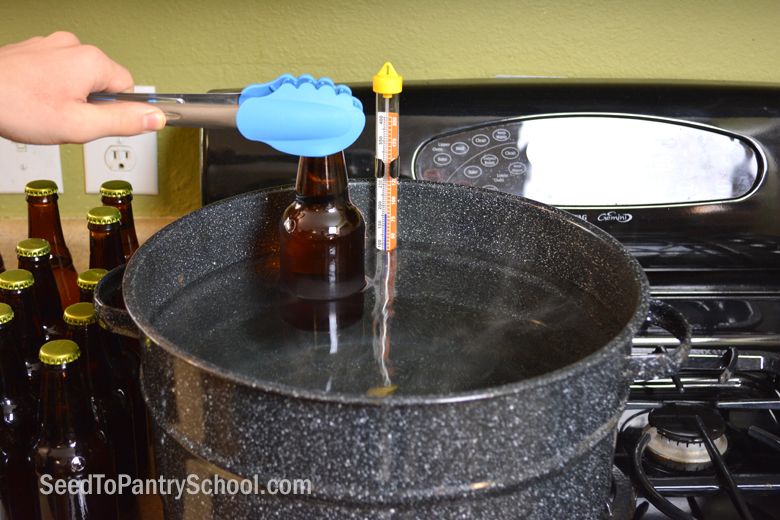 Turn the heat off, and carefully lower your bottles into the hot water. Be sure your bottles are at room temperature and haven’t been refrigerated–you don’t want to drop cold glass into hot water! 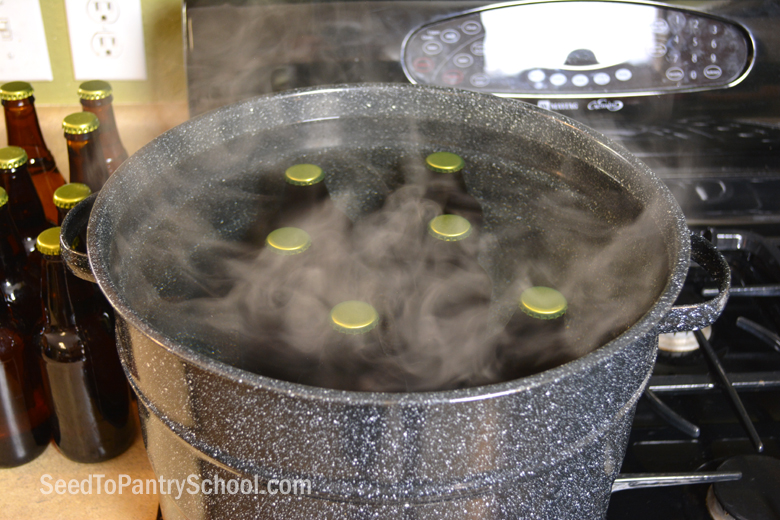 Don’t load too many bottles into the water bath–I usually only do 6 or 8 at one time. Once they are all in, put the lid on the pot and let the cider sit for 10 minutes. 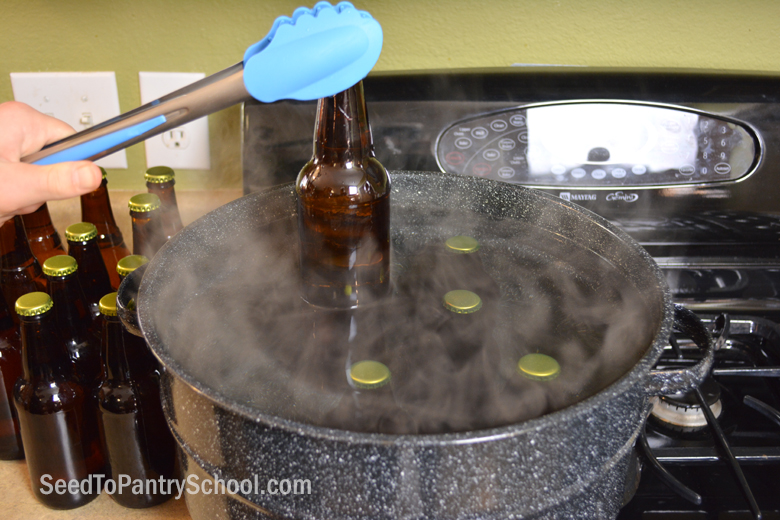 After 10 minutes, carefully remove the bottles and let them cool down to room temperature. Heat your water back up to 180°F and repeat the process until all your cider has been pasteurized.

Your water needs to stay at 160°F or above for the entire process. Mine was about 165°F when I took the lid off and removed the bottles, but if yours drops lower than this during the 10 minutes that the bottles are sitting then you may need to keep a low flame going. 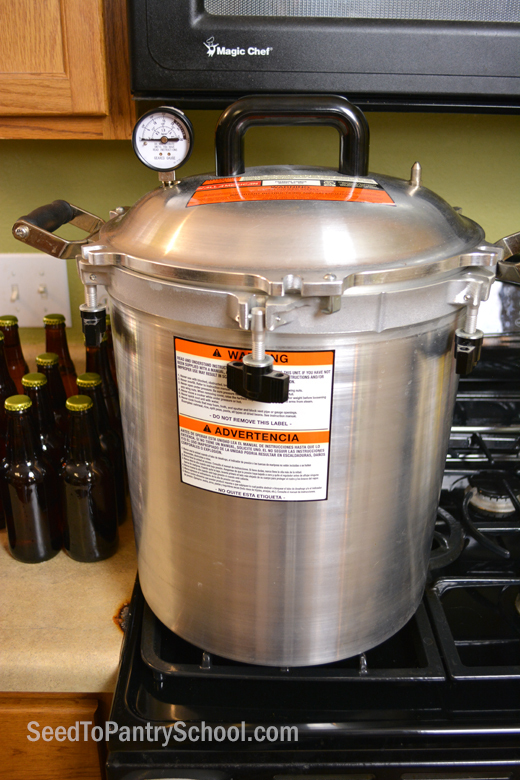 It’s fine to use a pressure canner like this All American if you have long neck bottles that won’t fit into another pot, as long as you don’t seal it up, and you leave the pressure regulator off. You don’t want to actually build up pressure, you just want to retain the heat.

This process is only for bottles that have actually been capped with a bottle capper; you can’t use it with swing-top bottles (or something you’ve corked), as the heat could deteriorate the seal.

You could also try using a hard-side cooler instead–the type you’d take on a picnic. You’ll have to test it to see if yours will keep the water warm enough for the full 10 minutes, and obviously it’s not as easy to re-heat the water each time, but it’s a good option if you don’t have a pot large enough to hold your bottles.

With the cider I have pasteurized at home, I haven’t encountered a noticeable change in the flavor of my cider, and I’ve never had a single bottle explode when stored at room temperature. If you’re starting with store-bought apple juice, then it has probably already been pasteurized anyway, and it still tastes fine!

Check out our other Brewing The Easy Way posts: 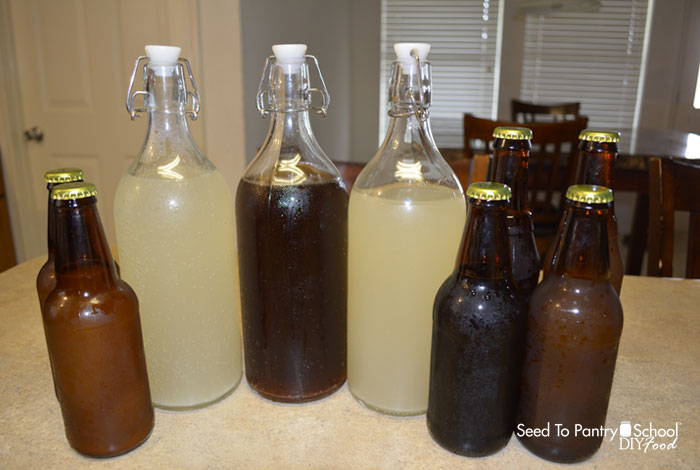 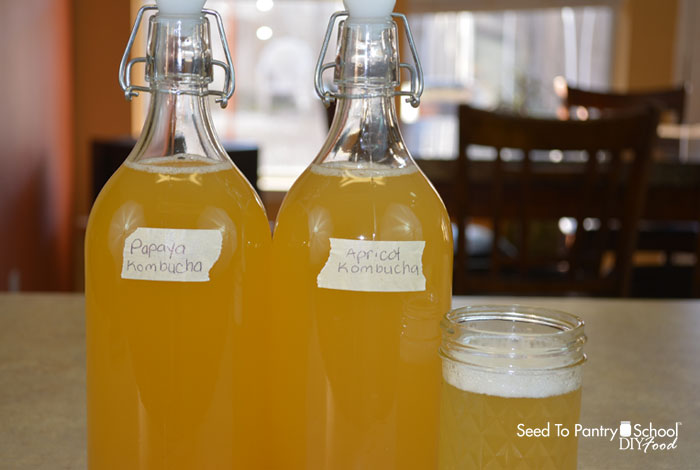