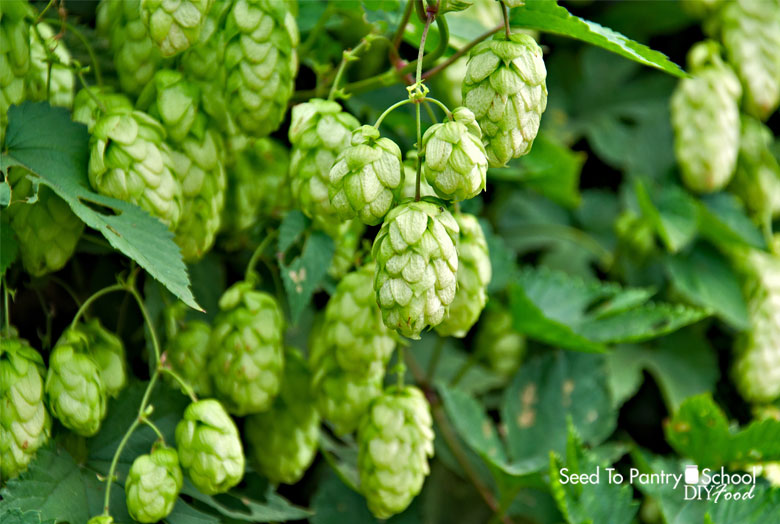 If you’re a hard cider purist, you might think it’s sacrilegious to brew a dry hopped cider – why would you have anything other than apples in your hard cider? But there are actually good reasons that hops and hard cider work well together!

First, to most beer drinkers, hops are a familiar flavor and aroma. Many American hop varieties, such as Amarillo and Cascade, can give your cider citrus-y flavors that complement and elevate the cider’s natural characteristics.

Hops are cone-like flowers of a climbing vine that resemble thin, green pine cones. They are native to warmer areas of North America, Europe and Asia. They contain acidic essential oils and resins that brewers use to give beer its bitterness and aroma.

One of the earliest uses of hops was as a preservative – they were added to casks of beer that were done fermenting, in order to keep the beer fresh while it was being transported. That’s how beers like India Pale Ale were invented – in the early 1800s, British brewers began adding lots of hops to a strong ale in order to preserve it during the long sea voyage to India. When it was finally unloaded, the beer had taken on the flavor and aroma of the hops.

Today, hops are typically added to beer at three different stages, for three different reasons. First, hops are boiled in the wort (the mixture of malts and sugars that will be fermented into beer) for about an hour to add bitterness. About 30 minutes into this boiling process, additional hops are added to flavor the beer. Finally, during the final few minutes of the boil, even more hops are added for aroma. Each of these three additions of hops could use the same type of hop, or different ones.

Hops can also be added to the beer (or cider…) after it has finished fermenting, in order to add a unique flavor and aroma. This process is called “dry hopping”, and it’s what we’ll be doing to make hopped cider. It is best to do this late in the fermentation cycle; if you add the hops while it is still actively bubbling, then a lot of the aroma will be carried away by the carbon dioxide bubbles. Since you’re not boiling the hops, the acids don’t go through the chemical change that would create bitterness, so you just end up with the aroma and flavor.

There are over 100 varieties of hops currently used in brewing today, so what type should you use for dry hopping cider?

When you buy your hops, the package should list the percentage of two types of acid (Alpha and Beta), as well as the types of aromas (herbal, citrus, spice, etc.). You want a variety that has a low Alpha acid, around 6% or less; these varieties will have a higher percentage of the fragile aromatic oils needed for dry hopping. Your choice of aroma will be a personal preference; I prefer varieties that have lots of citrus, lemon or grapefruit aromas.

Hops come in three different forms, and each has advantages and disadvantages. 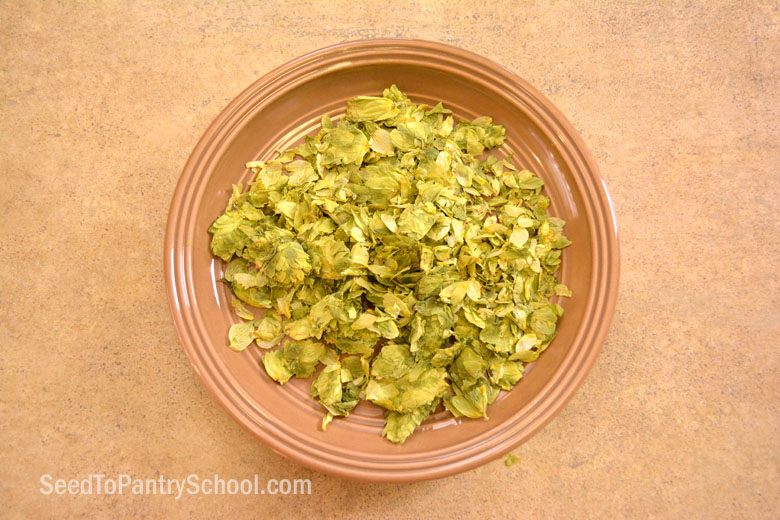 Whole – These are the whole dried leaves of the hops. They work great for dry hopping, since they have the best aroma and flavor. They also float, making them easy to strain when you’re ready to bottle. The disadvantage is that they tend to soak up some of your liquid, meaning you will lose a small amount of cider when it comes time to bottle.

Pellets – These are whole hops that have been tightly compressed into pellet form. They are easy to store, don’t soak up the beer or cider, and you can even find some interesting custom-blended forms (since different kinds of hops can be mixed and pressed together). The disadvantage to them is that they dissolve in your brew, making a sludge that is a little more difficult to strain out.

Plugs – These are like pellets, but are compressed into larger half ounce rounds (like a small hockey puck). They work like whole hops in your brew, and will soak up some of your cider. Not every brewing supply store carries hops in this form.

Whatever form of hops you choose to use, storage is important. Fresh hops should have a light green color and have a pleasant herbal or citrusy aroma. Your hops should be stored in oxygen barrier bags and kept cold to preserve their freshness and potency. If you can smell your hops when you open the refrigerator door, then the hop aroma is leaking out through the packaging and they are not well protected from oxygen.

How To Make Dry Hopped Cider 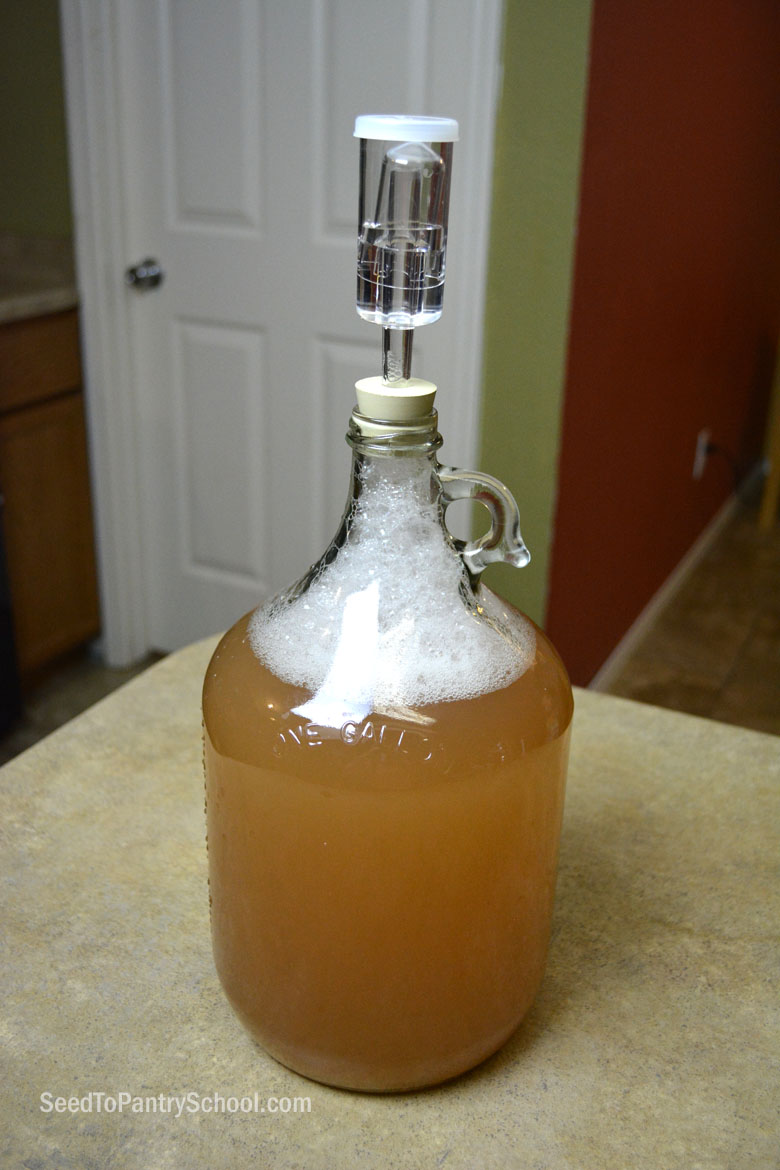 Start your cider the same way I described in the previous post – prepare your yeast, add it to your apple juice, and the fermentation lock, and set it aside. Your cider will ferment for at least a week, so while you’re waiting, it’s time to choose your hops. It’s best if you can go talk to the folks at your local homebrew store – they can recommend a good variety, and their hops will likely have been refrigerated the whole time they were in store. But if you don’t have a store convenient to you, you can still order them from Amazon or another internet supplier and still have good results. Just remember to look for hops with a low Alpha acid and an aroma you’d like.

For your first attempt at hopped cider, I recommend using whole hops – they’ll be easier to strain out when it’s time to bottle. 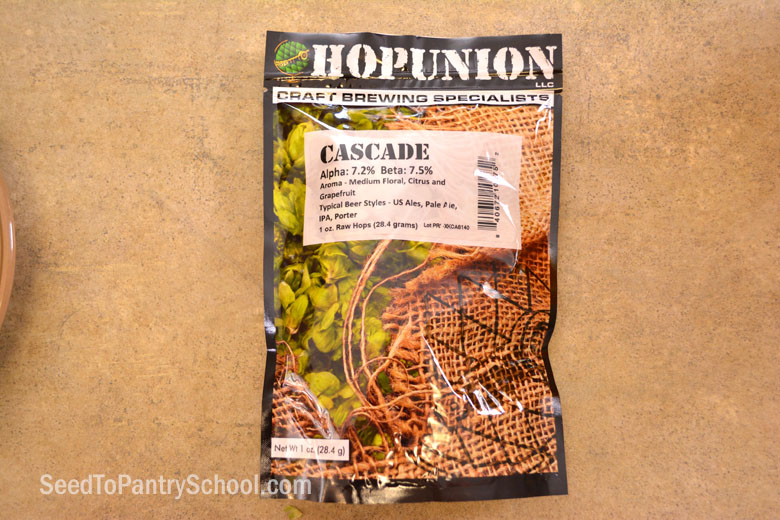 For my hopped cider, I used whole Cascade hops. These have an Alpha acid that’s a bit higher than I would normally recommend (7%), but I really like the flavor and aroma. Plus, they are what I just happened to have on hand!

You can add the hops directly to your fermentation jug, or place them inside a cheesecloth bag to make them easier to remove when it comes time to bottle. A more expensive (but more convenient) solution is to use a special dry hopping tube – a sealed stainless steel tube that holds the hops, and can be completely removed leaving no hops behind in your cider.

Since I was using a 1-gallon glass fermentation jug (a recycled apple cider jug), the neck was a bit narrow to try to stuff the hop-filled bag through, so I just added 1/2 ounce of the hops straight into the cider. If you are using pellet hops, you would probably want to add about 10% less due to them being compressed (and more concentrated). 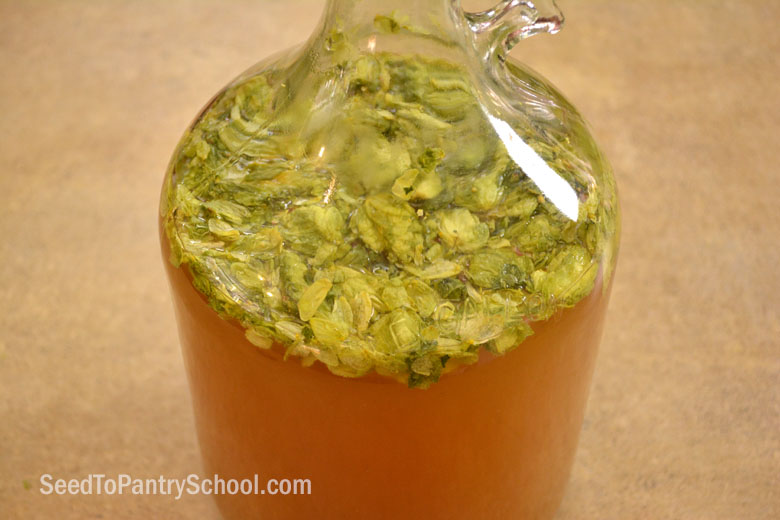 About 1 week after you’ve added the hops (so at least 2 weeks after starting), it will be time to rack the cider, plus sweeten and carbonate it if you choose. Again, take a look at my post on making hard cider for complete instructions on this. Because the hops float while the yeast sediment sinks, racking (siphoning) the cider will be a little more difficult. You could tie a small piece cheesecloth around the end of your siphon hose, or you could direct the output of the siphon into a tea strainer to catch any hops that get sucked through the tube. Once your cider has been racked, then sweeten to taste and carbonate if you’d like. 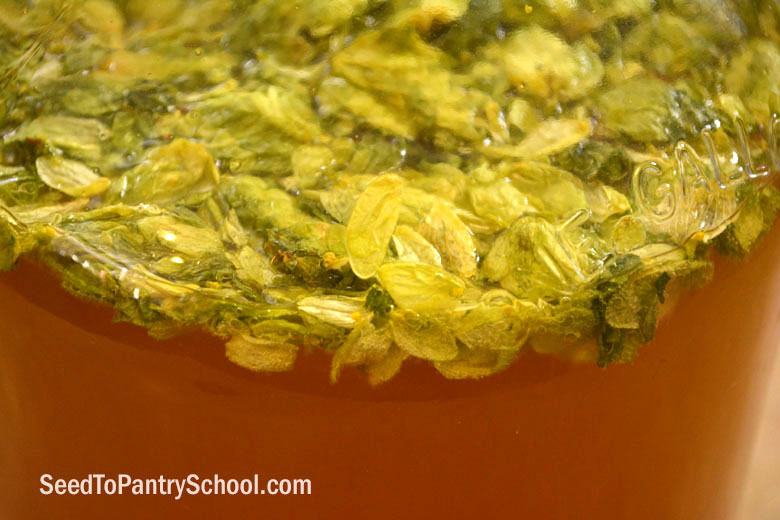 Just like regular hard cider, hopped cider tends to get better with age, so if you have the patience try to let it age for at least 2-3 months. This cider is fantastic tasting and has a nice complexity thanks to the apple flavor and the hops. Let us know in the comments if you find a particular variety of hops you really like!

Check out our other Brewing The Easy Way posts: