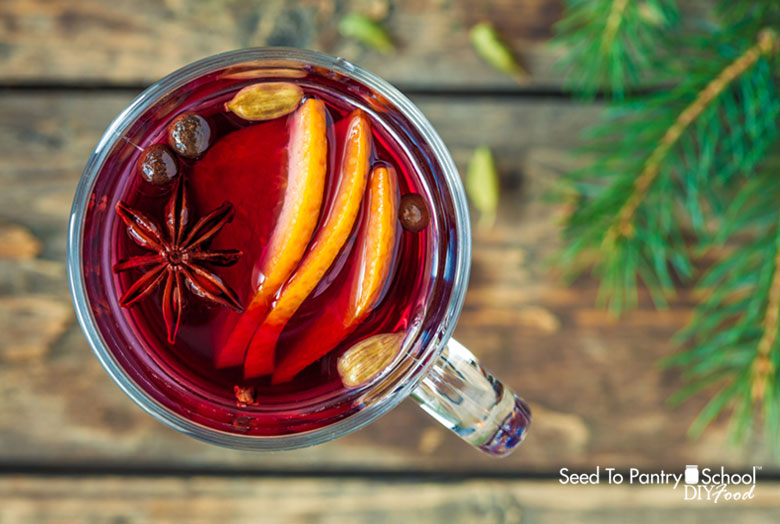 It’s the time of year when folks like to sit in front of the fire with a nice warm drink. In our house that’s spiced apple cider, or maybe something a little stronger for the grown-ups. Go to any gourmet store and you’ll find fancy jars of mulling spices with even fancier price tags. There’s nothing special or secret about the ingredients; you can make them at home for a fraction of the cost!

You’ll need some cotton spice bags with drawstrings; usually the more that are in the package, the cheaper they are.

Mulling spice recipes typically have 3 or more ingredients such as: allspice, apple, cardamom, cinnamon, citrus rind, cloves, ginger, juniper berries, mace, peppercorns, star anise, and/or vanilla bean. There’s no one exact recipe–some people like it heavy on the cloves, while others prefer a more cinnamon taste. Try mixing and matching spices until you find your perfect combination; you’ll find four of my favorites below.

Make Your Own Mulling Spices–The Recipes

Take It Up A Notch Spice Recipe

Slice the oranges and ginger into 1/8″ thick pieces and dehydrate them – read this article on how to dehydrate citrus.

Divide the oranges, ginger and spices into 8 bags and secure with twine.

Combine red wine and fruit juice in a large sauce and heat it to just below boiling. Add the mulling spices, reduce heat to low, cover and simmer for 20 minutes. Remove the mulling spice bag.

You can serve it warm with a slice of orange, or let it cool and return the wine to the bottle to chill.

Combine apple cider and maple syrup in a sauce pan over medium heat and stir until syrup is completely mixed. Increase heat and bring it to just below boiling. Add the mulling spices, reduce heat to low, cover and simmer for 20 minutes. Remove the mulling spice bag.

Serve warm with a garnish of cinnamon stick.

Prepare the hot tea as per directions, letting it steep for 20-30 minutes. Remove the tea bags and combine the tea, brown sugar, apple cider, butter and bag of mulling spices in a sauce pan. Increase heat and bring it to just below boiling. Reduce heat to low, cover and simmer for 20 minutes. Remove the mulling spice bag, add the liquor, and serve garnished with a cinnamon stick.

Simmer 12 oz. of maple syrup and a bag of mulling spices over low heat for 5 minutes. Cover and chill 24 hours. Discard the spice bag. Serve warm with pancakes, waffles or french toast. The syrup may be stored in the refrigerator for up to 2 weeks.

Simmer 16 oz. of apple cider vinegar and a bag of mulling spices over low heat for 5 minutes. Remove from heat and let stand for 3 hours. Discard the spice bag. Use as a vinaigrette dressing for salads; may be refrigerated for up to 2 weeks.

Bring 2 bags of mulling spices and 8 cups water to a boil over medium heat; reduce heat to low, and simmer 3 to 4 hours. Start this just before your holiday party for a festive aroma!

Do you have a secret recipe for mulling spices you’d be willing to share with us?